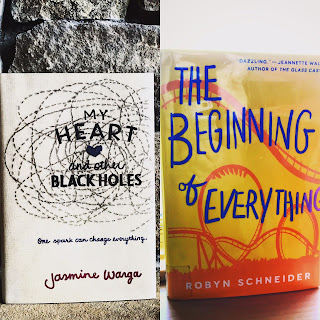 Hello, everyone! This week has been both busy and exciting. If you haven't heard already, Germ Magazine has requested to publish two of my poems on their magnificent sight germmagazine.com (The first of which went up yesterday). I've also been doing a ton of reading lately. I've gone through the John Green section of the library (I have some really cool articles planned for these books), and yesterday I got my hands on Jenifer Niven's Holding Up The Universe which I'm so excited to read. Aside from my regular articles, expect to see a few book/ movie comparison articles over the coming months and a feature piece on The Catcher In The Rye. And again, if you haven't already, please follow the site on Facebook and Instagram @readingwritingandme and Twitter @readwriteandme. Also, tell your friends about the site, and let me know what you like and what you think could be improved. 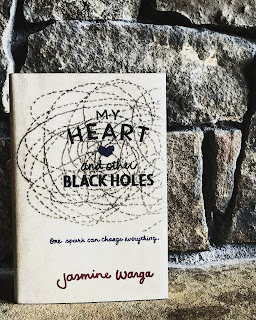 My Heart and Other Black Holes by Jasmine Wanga (302 pages)
Overview: Aysel's life had never been great. Her parents divorced barely a year after her birth, and she spent most of her childhood living with her father only "intruding" on her mother's new perfect family on the weekends. Already put behind at school for looking different from all her Kentucky classmates because of her Turkish descent, her position as an outsider is sealed when her father murders the town's teen Olympic hopeful and is arrested. As an alien in her home and town, Aysel rightfully sees her life as pointless and empty, and combined with her fear, stoked by the stigma in town, that she has some crazy gene that she wi end up like her father, she decides that she wants to take her life. Her problem is that she wants to make sure she doesn't do it halfway. Through a suicide partners website, she finds Frozen Robot, otherwise known as Roman, a local seventeen year old boy also looking to die. Through their planning meetings they start to fall for each other as they finally find someone who understands. This makes Aysel realize that her life does have value and potential. The question is if she can convince Roman of this before it's too late. Though it is a very serious topic, Wanga mixes in plenty of levity and sweet romance that makes this an impactful read. Overall: 5
Characters: 5 Our POV character Aysel has quite the engaging voice. She has a hint or sarcasm and a bit of dark humor to her, and her outlook on the world is an interesting and relatable prospective. Her narration of the book and her growth which is subtle but evident throughout make this a fascinating read.
As for Roman, he is also an interesting character. He, unlike Aysel, is 100% sure ending his life is the only viable option. Getting to know Aysel and experiencing the growth of their relationship makes him realize that he wants Aysel to live, but he still feels that he has to die because he feels responsible for his sister's death.

Plot: 5 The plot and plot evolution of this novel is touching, beautiful and needed. Seeing Aysel's eyes opened to the possibilities of the future and her heart open to hoping for something greater than what she has is something to watch. The sweet and unlikely love story and unexpected plot twist will keep the reader turning the pages. )(I finished it in one four hour day of reading.)

Writing: 5 I have to aplaude Wanga for her writing talent, especially in regards to character development. Her writing has a subtle nuance to it that executes all the nessicary writing mechanics to make a story glitter while letting the character fully speak to herself. I also have to commend her for her beautiful handling of a very difficult topic. 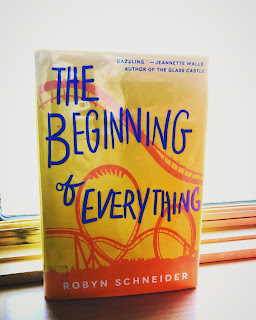 The Beginning of Everything by Robyn Schnider (335 pages)
Overview: Ezra Faulkner was always the golden boy, prom king, captain of the varsity tennis team, and generally popular guy. That had been his place since freshman year, so when his wrist and knee are destroyed in a hit and run accident at the end of junior year, the new Ezra, who can never play sports again, wears a wrist brace, and carries a cane, must reevaluate his place in the world. As a senior he realizes that the popular kids might not be the group he belongs to. Spending more time with his friends from debate, Ezra meets Cassidy Thorpe who really changes everything. Opening his eyes to life and living, Cassidy becomes an important part of Ezra's life, so when she disappears the night of homecoming, Ezra is rightfully jarred and confused. The reader gets to see Ezra realize that what he thought he wanted, what everyone said he wanted, was not the life he wants to lead. While the themes of this novel are wonderful and beneficial to readers, some of the execution left me a bit disappointed. Overall: 4

Characters: 4 These characters started the novel pretty solid. Ezra is a funny character and quality narrator, though there was some places where you could hear the female author's voice coming through. I loved the character of Cassidy until they reach homecoming (About 2/3 through the book). Afterwards the characters seem to blur and start acting in strange ways that feel out of character even if some of their past actions justify the plausibility.
The popular group, and sadly some of the debate team remains a bit plastic in my opinion. Of course, humanizing or adding depth to the popular crew goes against Ezra, the POV character's, stance, but making them seem a bit less cardboard would have been nice. It seems Cassidy was the only character that really exhibited complexity.

Plot: 4 Again, I really enjoyed the story until homecoming. Afterwards the plot started to go a bit haywire as Ezra jumped from one place or idea to the next. Despite it being a bit flimsy, the overall story is pretty good and shares quality messages.

Writing: 3.5 In my opinion, this book has a problem that could stem from one of two things: the author lacks faith in her writing or she lacks faith in the ability of the reader to assume deeper meanings and draw conclusions. This, unfortunately, leads to the issue of chronic over explaining. After nearly every important moment, Ezra gives a long, drawn-out monologue about what moral lessons he learned from the situation and how he has grown. The scenes communicate this information to the reader well without the explanation, and reading the following paragraphs makes the impact less strong. Also, there are only so many times "Deadpanned" can be used as a speaker tag.