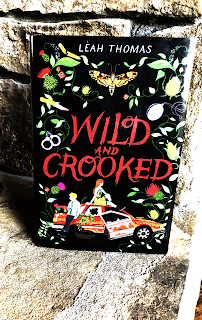 Wild and Crooked  by Leah Thomas  Overview: A murder from a generation ago still haunts a rural Kentucky town. Two families that might as well be the Capulets and the Montagues are at the center, stirring drama through the town. When the alleged murderer's daughter and the victim's son form an unbreakable friendship and new evidence comes to life, the town gets torn up again over the controversy. Overall: 5+++ Characters: 5 I am so in love with every single character this book- and there are quite a few. Kalyn Spence is the daughter of a murderer. Her mother married her father when he was already behind bars. She's been in the center of controversy her entire life. She's a bit jaded, but she's so self assured. She's fierce and stunning and soft, and I would read a million books with Kalyn Spence at the helm. Gus is the son of the victim, his father from the famous Ellis family. Gus was supposed to carry on the heroic legacy, but his grandfather is horribl
Post a Comment
Read more 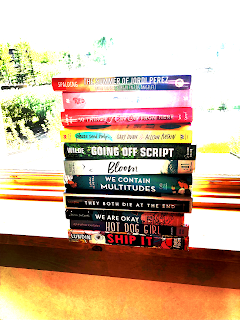 Happy Pride Month everyone! I wanted to celebrate with a list of some awesome books featuring LGBTQ protagonists. I tried to put mostly ownvoices authors at the forefront of this list, but not all of them are. I love that we're getting so many lovely, diverse books, so I wanted to share some of my personal favorites with all of you. Let me know in the comments which ones you love! The Summer of Jordi Perez This is the perfect book, both for Pride Month and the start of summer. Jordi will get you in the summer spirit with this super cute romance.  Red, White, and Royal Blue I'm so excited to see NA starting to make a comeback! Living up to the hype, this is the perfect love story for royal lovers and those fascinated by what happens at the White House. 10 Things I Can See From Here Maeve may be full of anxiety, but when she falls for a fearless girl, her world starts to change in ways she never expected. It's a wonderful romance and mental health book.  Please
Post a Comment
Read more 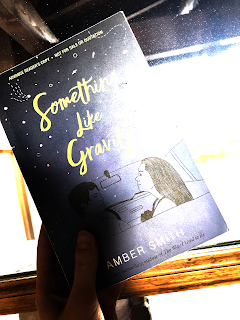 Something Like Gravity  by Amber Smith (386 pages) TW: Violence towards a trans person Overview: Chris needs to get out of Buffalo where everyone remembers him being stuck in a hospital bed and why he was there. Maia is still struggling, living in a home, crowded with the ghost of her older sister, Mallory, and her parent's divorce. Maia and Chris find each other as Chris's parents drop him off in Carson to live with his aunt and have a summer away. Though they're weary of letting people in, the two recognize a similar fear inside one another. Their relationship offers comfort and healing but also have the potential for even more heartaches. Overall: 4 Characters: 4 Maia is still lost because she hasn't had a real support system to grieve with. Her parents have been divorced, but they live in the same house in icy silence, both emotionally unavailable to Maia. She starts to take on Mallory's identity, grabbing her camera and going out to recreate her photos.
Post a Comment
Read more

A Lite Too Bright 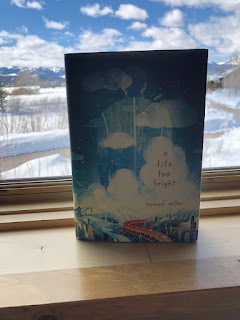 A Lite Too Bright  by Samuel Miller (480 pages) Overview: In a contemporary quest story, Arthur Louis Pullman the Third traverses the country, following the clues left behind by his grandfather, five years ago before he finally succumbed to dementia. Though the clues are small and easy to miss, Arthur is determined to find the lost connections and escape from his own crumbling life. Where the Amtrak train leads him, though, is much more than he bargained for. Overall: 4  Characters: 5 If you like unreliable narrator stories, this one is for you. Arthur is plagued by hallucinations of his ex-best friend and girlfriend as the trip starts and he has a hard time distinguishing certain hallucinations from reality. Beyond that, he's a deep thinker and critical even though he sees the world from a relatively sheltered place. The trip helps to expand his world. Mara is his travel companion he meets on the train. Running from problems of her own, she feels a connection to Arthur. Also,
Post a Comment
Read more
More posts