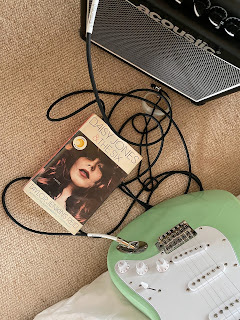 Daisy Jones & the Six  by Taylor Jenkins Reid  Buy the Book via Bookshop! this post uses affiliate links which means I get a small commission from your purchase at no cost to you! learn more  here . Overview: The Six was a band started by two brothers that eventually grew to include another pair of brothers, a drummer, and a keyboardist. And together, led by Billy Dunne, they were good. Good enough to get enough attention to be flown out to LA to sign to a record label.  Daisy Jones was born into the glamorous Hollywood life but to distant, self absorbed parents. She soaked up the world of the Sunset Strip, though, and all the drugs and rock 'n roll that came with it. Both effortlessly beautiful and vocally talented, she easily scored a recording contract, but she only really wanted the one thing that didn't come perfectly naturally - to be a revered songwriter. Still, Daisy Jones was good too.  But then Runner Records, who had signed both the Six and Daisy Jones, made them
Post a Comment
Read more

My Year of Rest and Relaxation  by Ottessa Moshfegh Buy the Book via Bookshop! this post uses affiliate links which means I get a small commission from your purchase at no cost to you! learn more  here . TW: drug use, mentions of suicide/self harm, bulimia Overview: While we don't know the protagonist's name, nothing in her inner world is off limits as Moshfegh probes through the life of a grief stricken, isolated young woman in New York City at the end of the year 2000. After graduating from Columbia, the protagonist wanders through life halfheartedly working in an art gallery, seeing a man who is generally disinterested in her, and only offered companionship by a best friend she hardly likes. As her life slowly spirals downwards, she starts coasting on her inheritance from her parents' estate and decides to employ a psychiatrist with shaky morals to give her enough drugs to sleep through the next year of her life. Maybe if she can finally, truly rest, she'll be able t
Post a Comment
Read more
More posts