Ten Things We Did (And Probably Shouldn't Have) 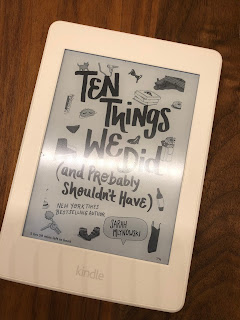 Ten Things We Did and Probably Shouldn't Have  by Sarah Mlynowski (368 pages) Overview: April's parents divorced right before freshman year. Then her mother and brother moved to France. Through all the change, though, she always had Westport, Connecticut, her boyfriend, Noah, and her friends Marissa and Vi to keep her sane. So when her father announces April and his new wife Penney are moving with him to Ohio, April is sure she won't be going. Though a remarkable scheme, she convinces her father to let her move in with Vi, who's mother is part of a national tour of Mary Poppins! While two high school girls in their own house sounds like a dream, the girls realize that living alone might be harder than they thought, and people they wanted to depend on might not always be there for them. Overall: 4  Characters: 4 I really liked the cast for the most part. April was a great and relatable main character. Vi made for a great, somewhat levelheaded friend that made the p
Post a Comment
Read more
More posts