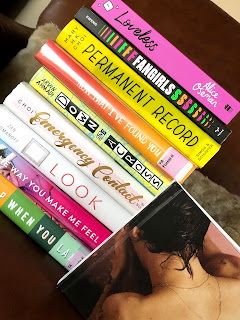 As you can probably tell, I've started doing a lot of tags since I've started school. Honestly, I haven't been in the most creative space lately, and school has been making me really tired, so tags have been calling my name. Since I found ones for Taylor Swift and Halsey, I thought I'd go looking for a tag for another of my favorite artist, Harry Styles. I was excited to discover that one does already exist, created by Lainy at Bookish Bits . You can read her version of the tag here . If you also like Harry Styles and books, consider yourself tagged.  Also, if you're curious about any of the books mentioned below, just click the title to get to my review.  1.  Kiwi :  A   book   with   a   title   that   has   nothing   to   do   with   the   book . I feel like every title has some connection to the book. Some are just more obvious than others. I'll go with The Way You Make Me Feel  here since it's one of the most abstract titles  2.  Sign   of   the   times
Post a Comment
Read more

Now That I've Found You YA Book Review 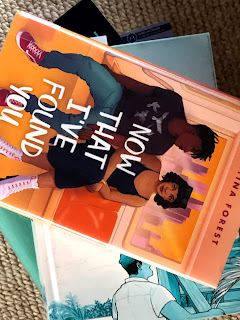 Now That I've Found You  by Kristina Forest Support the Blog and Get A Copy!* Overview: Evie might have thrown away her entire career in a goofy, drunk moment. When her supposed best friend, Simone, leaks a video of Evie's sarcastic impression of director Paul Christopher, she loses the lead role in his latest movie. With her reputation ruined, no new roles, and no best friend, Evie spends the summer bathing in grief and regret. When the FCCs decide to honor her legendary actress grandmother, Evie realizes that presenting the award will give her the PR boost she needs to stop being an outcast. Upon arrival in New York, though, Evie discovers her grandmother has befriended Milo, the boy who brings her groceries, leaving Evie feeling weird and replaced. When her grandmother flees the brownstone for some space, Evie is forced to accept Milo's help to find her before they miss the ceremony. Overall: 4.5 Characters: 5 I loved following Evie and Milo. Evie is in a weird transit
Post a Comment
Read more

I Dare Ya Book Tag: YA Edition 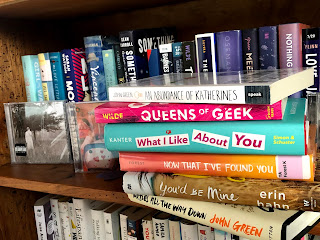 Today, I'm doing another book tag that's not so much themed as answering questions as a getting to know me: bookish edition. I found this one on the web and couldn't figure out who made the tag originally it was done so widely, but if this is your tag or you know whose it is, let me know in the comments! I really want to give credit.  Anyway, I thought this would be a fun way to start a Tuesday morning. Let me know your thoughts on these questions in the comments below. If I have reviews of the books I talk about, the links are always clickable!  What book has been on your shelf the longest? I'm assuming this means on my shelf unread? That probably has to go to Internment . I had books that had been there longer, but I realized I was never going to read them, so I gave them away at some point last year. I really do want to read Interment because it got great reviews and is about a very important topic, but I feel like I have to be in the right place for a book like th
Post a Comment
Read more
More posts