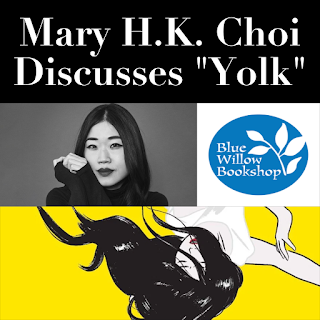 I've been lucky enough to get to see Mary H.K. Choi at two different stops on her virtual book tour for Yolk - once at Books Are Magic (located in Brooklyn) and once at Blue Willow Bookshop (located in Houston). I didn't take many notes during Mary's conversation with Jenny Han, but last night, at Blue Willow, I took tons of notes as Shea Serrano and Mary H.K. Choi discussed fascinating questions that gave more insight into how her new book took shape. Here are some of my favorite moments!  One of the opening questions of the night hit at something that I've been wondering a lot about on the eve of making a major leap to New York City myself. Shea asked Mary if, similar to the characters in her book, she felt compelled to change when she moved to New York in the early 2000s. Mary talked about how she felt like for so long she was saving up all her energy to totally start over in New York. She talked about how difficult it is to navigate a new city and so much change at
Post a Comment
Read more

My Most Anticipated New YA Contemporary for March 2021 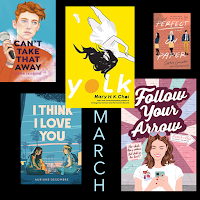 March is delivering so many books I need in my life right now. March is one of my favorite times of year as a book blogger because it's the month of my blog anniversary and it's also a month that publishing dumps a ton of amazing books from the sky all at once, and I get overwhelmed in a really happy way. Here's a longer than usual list of all the YA contemporary books I'm looking forward to for March and have been anticipating for months now. Yolk by Mary HK Choi March 2nd Mary is one of my favorite YA authors and has been since her debut. She's also just the coolest person, and I think because of that she writes some of the most unique YA. Her books tend to hit towards the oldest of the YA age range, which, as an older teen, is super appealing. They also just have a very distinct style to them that's comforting and realistic and extremely grounded in this world. Her characters are always as lost and messy as I am. June is the older sister by three years. She w
Post a Comment
Read more
More posts