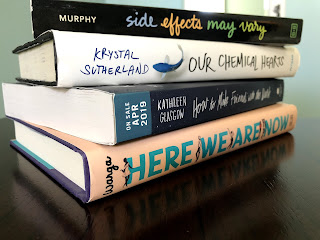 Today's post is a little bit of a mash up. At the end of the post, I'll be giving two short reviews, one for upcoming release, This Splintered Silence  and one for the All The Bright Places  audiobook. But right now, I want to have a short discussion about an area of YA that's very small. It's college aged YA. Sometimes, it's called NA (for new adult), but the category isn't widely used, and, sadly, NA has come to mean sexy YA. This turn has started to destroy that market as its 18-25 year old intended audience tend to go for YA or adult reads instead. What got me thinking about the need for more upper YA was an amazing post I came across on Twitter by Vicky Who Reads (you can check it out  here ) who discusses how YA is forgetting it's core audience... teens. She discusses how we need to serve all teens both younger (bridge from YA into MG) and older. Off the top of my head, I can only think of two books that feature college protagonists ( Fangirl, Em
1 comment
Read more 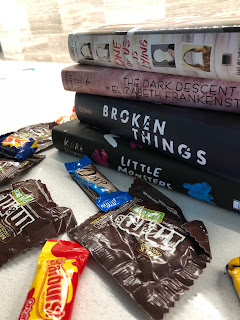 At the beginning of October, I unconsciously started reading murder-thriller books. It started with finally reading One of Us Is Lying  and then I went to Lauren Oliver's book event for her new book, Broken Things , so I decided I would pick up a few more to read on the many plane rides I've taken recently and make a list for you. I've ranked them by the books I enjoyed most, but I'm also throwing a scariness ranking below too. 1. The Cheerleaders  by Kara Thomas I loved The Cheerleaders . Even if I wasn't narrowing this to just thrillers, this would still be up there. While there's no immediate threat, there's still a sinister feeling five years after five cheerleaders die in a year in three accidents. One of the girl's sister, who investigates, also has a complicated life of her own. Thomas did an awesome job of sprinkling the mystery clues and bringing us a story through such a strong voice. Here's my full  Review Here  (4.5 stars overall, 2
1 comment
Read more 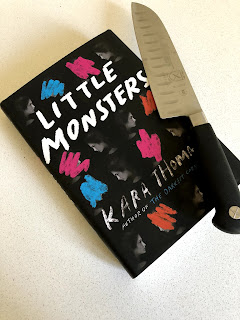 Little Monsters  by Kara Thomas (324 pages) Overview: When the new girl comes to town, she makes the perfect prime suspect when her best friend goes missing. When Kacey Young moves in with her father she doesn't know, her step mom, step brother, and half sister, she doesn't know what to expect, but she knows it will be better than living with her mom. Soon enough, she's fallen into place with her new siblings, Andrew and Lauren, and her two best friends Jade and Bailey. Life is great until she stumbles upon the trail of her best friend's possible murder. Overall: 3.5 Characters: 3 What I loved about The Cheerleaders  was how real the characters were. They had a weight and gravity that you see hints of in this book, but it isn't quite all the way there. Kacey is the best fleshed out of all the characters. She makes a great main character as she straddles the inside and outside of Broken Falls. While her family members don't have her sense of gravity, their
Post a Comment
Read more
More posts