- July 23, 2017
Hello, everyone! This week features one of the books on my top five favorites of all time, Misquitoland by David Arnold. It has an incredible plot that keeps readers engaged and wonderful imagery, but beyond that, Mim's voice shines in a special way that makes the story unique. It is definitely one of my top picks for summer reading (or any reading) books. Looking forward, I can tell you that there are some amazing books coming up soon as well as some interesting articles as we all look towards the school year. I've also been really happy to see that our reach is growing as we get more and more readers each week. Please help us keep this up by telling your friends and family, enjoying our other articles, and following us on social media which is a great place to find out about posts or extras for our followers. You can find us on Instagram (@readingwritingandme), Twitter (@readwriteandme), and Facebook. The comments are also a great place to share your thoughts on the reviews and your thoughts on the books we've reviewed. 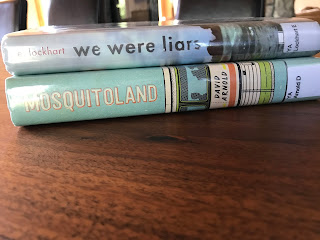 Mosquitoland by David Arnold (342 pages)
Overview: Mary Iris Malone has had enough. Enough with her father and her stepmother and Mississippi and enough of being kept from her mother. She decides that she has to go to Cleveland where her mother moved after her parents divorce. After walking out of school, she gathers a journal, some cloths, and her stepmother's coffee can of money and makes her way to the Greyhound station with her objective clear: Get to her mother before Labour Day. The objective is all Mim has to go on as she embarks on the craziest road trip possibly ever. Along the way, through many detours both good and bad, she learns about herself and develops more ideas about how the world works. It is hard to write a description of this epic journey because I don't want to spoil any of the delicious details, so you'll just have to trust me that you will not be disappointed. Overall: 5

Characters: 5 Mim Malone is a standout character. From the opening page, as with all five star books, her voice grabbed my attention. I loved her perspective on the world and her slightly sarcastic slightly cynical outlook on both the world and her situation.
As for the other characters Mim encounters along the way, Arnold does a fantastic job of building even the most minor of minor characters in a complete and utterly Mim way.

Plot: 5 Mim's journey is certainly an unbelievable adventure with so many twists and turns and zigs and zags that an exception for the story cannot be established and therefore no element of surprise can be used. Each page lead to more remarkable pages making me never want to get off the rollercoaster.

Writing: 5 Of course all five-star books shine because of their writing, but this one especially so. Mim's character has such a unique voice due to the unique style of Arnold's writing. It feels both stripped down and vulnerable as well as filled out with luscious language and descriptions creating an indescribable and completely fulfilling novel.
The other point I wanted to make about this book is that because of the inherent nature of grand runaway stories, many lack believability. Oftentimes this issue arises because the events are too farfetched or seem like they would be impossible for the character to actually overcome it in the way they did. In this story, that is not the case thanks to the construction of Mim's character. Even with some semi outlandish events, there was never a time when I felt Mim was incapable of overcoming the event or that she did it in an out of character fashion. By this token, Mim's strength and determination make her an excellent character that I am still in awe of from both a reader and writer prospective.

We Were Liars by E. Lockheart (225 pages)
Overview: Cadence is a Sinclair. The Sinclairs are a perfect, all American family who live off trust funds and know all about keeping up appearances event to her family. Each year Cadence, her mother, grandfather, and their two aunts along with the cousins go to their private island off the coast of Massachusetts. Until the summer Cadence and her three closest companions on the island, Gat, Mirren, and Johnny, turned fifteen their summers were idilic. Afterwards, though, all Cadence can remember about summer 15 is waking up on the beech in only her underwear and being rushed to the hospital. Since, she has battled crippling migraines that lead her to miss school and become socially isolated. After going to Europe with her father for summer 16, Cadence is back to determine what actually happened to her summer 15 and the events that lead up to her tragic accident. Overall: 3.5

Characters: 4 The Sinclair family is comprised of a slew of challenged characters. Cadence is grappling with the aftermath of an accident she barely understands while also challenging her family's ideals after some of the other Liars, particularly Gat, open her eyes to the errors of her family. In her determination to reinvent herself she dies her signature blonde Sinclair hair black and starts donating all of her things mostly to Goodwill in a protest to her family's materialism.
Gat is another interesting character that brings and outside perspective to Cadence about her families ways. Being Johnny's best friend and nephew to Aunt Carrie's boyfriend, Gat knows he doesn't belong. This is made worse by her Grandfather's insistence, born from underlying bigotry, that he doesn't belong because he is from Indian decent. Gat works to question the other Liar's belief system.
Finally, the character of the grandfather in an interesting one as he has a bit of a sadistic twist. He holds the power to delegate the money, the aunts's lifelines, and he uses this to play them against one another causing conflict and disarray.
The issue with these characters is that they lack a certain level of development beyond their interesting roles.

Plot: 4 The actual plot itself is quite interesting. There is a big mystery; a big question mark in Candence's mind around summer 15, and the plot of the book becomes solving it. This creates an interesting time of trying to discern clues from Candence's surroundings as well as the memory flashbacks that increase the longer she is on the island. My problem with the plot, more than anything, is with the writing that interferes with the clarity of the plot at times.

Writing: 3 For the positive notes on the writing, the concept is a very interesting one which got me to pick up and keep reading the book in the first place. Also, though there are some points that cause confusion, the overall  tone and use of the writing was easy to read making it a good, quick, summer read.
Clarity, though, is a big issue with this book. The issue manifests in many different ways throughout the book. The first that I noticed is how it jumps from memories of summer 15 to the current timeline of summer 17 without much differentiation. This left me wondering which timeline I was reading from sometimes for pages at a time. This was very disorienting and chaotic, and not in a creative way.
It is also clear that the author is experimenting with an unreliable narrator. I have read books where this is done very successfully like The One Memory of Flora Banks. Here, the execution was just not there leaving the reader utterly confused at the big reveal rather than surprised.
Finally, in some parts it bounced from third person to first person point of view with no warning and seemingly for no reason. There were passages in the middle of chapters before promptly handing the story telling back to Cadence. Perhaps if the author had taken better advantage of chapters instead of simply putting numbers counting of chapters in the center of random pages without concluding a scene, some of these devices would have been more successful. Instead it reads as one long narrative or a single chapter despite there being over 65 numbered chapters.
Reading Standout Book Weekly Reviews and Recommendations