Hello, everyone! It's now full on summer here, just after the Fourth of July, and this week I have a great beech read and one really thought provoking amazing book (but who says you can't read that on the beech?). I've been reading like crazy this summer and have been enjoying both my local independent bookstore and the amazing library here. I suggest you explore the libraries and bookstores in your area! 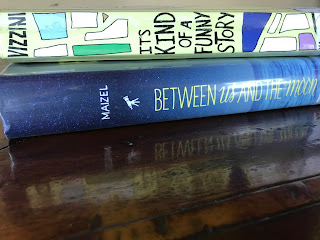 It's Kind of a Funny Story by Ned Vizzini (444 pages)
Overview: Craig suffers from clinical depression that appeared shortly after starting at prestigious  Executive Pre-Professional High School. He had worked all through his eighth grade year to study for the admissions test, and the day he got the results, a perfect 800 and an acceptance letter, was his last good day. As he starts to attend the school he realizes that he might not be cut out for the rigorous course work and intense pressure of the school. These feelings are only made worse by the effortless success of his classmates. This enacts a downward spiral as he feels he can't balance school work, his friendships, and the other problems in his life. This culminates with Craig deciding he wants to jump off the Brooklyn Bridge. Luckily, he calls the Suicide Hotline and seeks help at a local hospital where he is thrown into the adult psychiatric floor despite being fifteen. There he meets plenty of interesting people all trying to cope with their own chemical imbalances. It is there, without the pressures of school, potential failure, and bad friends, that he starts to heal and form constructive relationships with his fellow patients that make him realize his will, and above that want, to live. This is a great and important book about confronting your problems and getting help when they become too much to handle alone. Overall: 5

Characters: 5 Craig's voice reminded me very much of a modern, and far less profane, Holden Caulfield. He had a blunt, matter of fact attitude and a tangible intelligence. He had a full understanding of his world and what the pieces of his world are. His time in the hospital only helps him grow this understanding and gives him strength to scale back his toxic friendships and remove himself from the situations that sent him over the edge. Craig has defiantly earned himself a place as a highly important character in YA literature.
The other characters in the story are also important and well developed. Each of the fellow patients serve and important purpose for Craig and his self discovery acting as mirrors for him to look in on himself while also playing roles such as comic relief or potential love interest which also serve as foils to characters that exist in Craig's outside world.

Plot: 5 This story is mainly a character driven book, not to say it is devoid of plot, but the plot isn't really the point. Each step is meant to show Craig take a step forward or back and is full of plenty of introspection and notable growth.

Writing: 5 In the first section (there are eight) I wasn't too sure about the writing or the voice of the character (especially concerning the speaker tag "was like"). As the story progressed it really flourished allowing readers to get into Craig's mind and identify with the stressors and pressure he is under. And I came to really enjoy the voice. Not only does this book give great insight into aspects of mental health and mental healthcare, it also shares important messages about the pressure that is put on teens about school and the future and the crippling effects that it can have on young people.


Between Us and the Moon by Rebecca Maizel (364 pages)
Overview: This light, easy, breezy beech read tells the story of sixteen year old Sarah, or Bean as her family calls her. The story opens with Sarah getting dumped by her boyfriend, best friend since kindergarten, and fellow science geek, Tucker. Tucker telling Sarah that all she does is watch the world (or more accurately the comment she's spent eleven months tracking as her science project for an elite high school scholarship), lights a fire under her, setting the tone for her summer. In an attempt to live life as vibrantly as her older sister Scarlett, Sarah takes to imitating everything from her outfits to her mannerisms to see if she can be popular like her older sister. When she catches the eye of near twenty year old Andrew, Sarah concocts the ultimate lie, that she's eighteen and starting at MIT, so not to loose his interest. They embark on a whirlwind summer romance that draws Sarah into the world and out of the lab, and she realizes that Andrew loves her for her and not her fake Scarlett impression. But with her sister's eminent return from Juliard orientation and the summer coming to a close, Sarah doesn't know how long she can keep her lie up, or how to tell the truth without ruining everything. Can Sarah salvage her relationships before they all crumble apart? Overall: 3.7

Characters: 4 Sarah is a likable, and, at times, relatable character. Her boyfriend Andrew also seems like a quality and realistic guy. While all of these characters lack a certain level of dimension despite the author's attempts at complexity, this light read doesn't really require much development beyond having enjoyable characters.

Plot: 4 This is really a summer beech read romance that follows Sarah through a summer on the cape balancing her secret relationship and newfound social life along with her family that can't grasp that she's evolving. It remained interesting, keeping me reading even through a lengthy, four hour sitting.

Writing: 3.5 It was light and easy to read. The writing felt a bit elementary in comparison to most YA books. It really is middle grade level prose with high school/ teenaged content which was not my favorite, but it was still, overall, a fun, quick summer read.