- August 20, 2017
Hello, everyone! I'm actually getting this post up nice and early this morning for a change! Beyond these two great books I'm featuring this week, I want to give some short announcements into what's coming up for the blog. Next week, I'll be changing the review format, still sharing two books a week, but posting one on Wednesday and one on Sunday. Be sure to follow us on social media for special sneak peaks into the weeks ahead.
Also, I've been getting some exciting ARCs that I can't wait to talk about with everyone! Expect to see more post featuring these as it gets further into the year. Right now, I can share that I have finished posts for two awesome books, Sunshine is Forever by Kyle T. Cowan and A Short History of the Girl Next Door by Jared Reck, which I'll share closer to the books publication, and there are many more early reviews in the works! Following us on Twitter (@readwriteandme) is a great way to hear about the books I'm currently reading and sneak peaks for future posts! 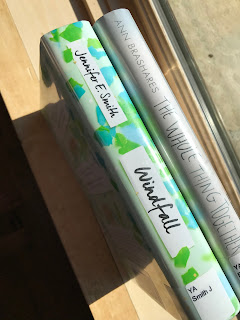 Windfall by Jennifer E. Smith (419 pages)
Overview: Could anyone imagine buying a lottery ticket and actually winning? Neither could Alice when she bought her friend Teddy a ticket for his eighteenth birthday as a cute gift. But when Teddy catches the newscaster announcing the winning numbers, Alice confirms those are her numbers. The only problem is that Teddy lost the ticket. After some frantic digging, the pair recovers the ticket and goes on to claim the prize. Even though Teddy has come into tens of millions of dollars, Alice refuses to accept the half he offers her for choosing the winning numbers. She's afraid of the change it may bring. Teddy's already over confident attitude is bolstered by his newfound riches which brings him both expendable money he's never had and five seconds of fame. Will this push away his friends, Alice and Leo? Will the shift among his peers make him regret his choices? Overall: 4

Characters: 4 I enjoyed the main characters, Leo, Teddy, and Alice. While they all are confronted with the main issue of the lottery winnings, Smith also gives each character their own storylines that mix with the main plot. Alice struggles with the loss of her both her parents nine years ago and her feelings about the patchwork family she has with her aunt, uncle, and cousin, Leo. She also struggles with whether she's formed her life too strongly around her parents old passions and dreams instead of what she wants.
Leo, Alice's cousin, struggles with his long distance relationship with boyfriend Max. He is forced to make tough decisions between his old, and still current, dream of going to the Art Institute in Chicago and moving closer to his boyfriend in Michigan in hopes of saving their relationship.
Teddy struggles with how to deal with his newfound riches, but also his broke, absentee father for whom he feels both obligated to help and done with. These complexities work to make interesting and compelling characters, but they seemed to lack a certain grounding weight that would have made them amazing.

Plot: 4 The story was interesting. It follows the three teenagers trying to grapple with either coming into an insane amount of money from having none, or having a close friend experience this. The plot takes you through the strain it put on the relationships along with the natural struggles that already exist in the lives of the three eighteen year olds. At some points, the story seemed to slightly loose its grounding and become a bit outlandish, but overall, it was engaging.

Writing: 4 I enjoyed Smith's writing style. It is light, breezy, and easy to read. I also thought the chapter length had nice variation which encouraged fast reading. This book that had over 100 more pages than the other book listed took me far less time. For a book about winning the lottery, Smith did a pretty good job with plausibility, though there were a few instances where Teddy felt more like a caricature than a person. Overall, this was a fun, easy read perfect for filling the long summer days.


The Whole Thing Together by Ann Brashares (295 pages)
Overview: At one time Lila Harris was married to Robert Thomas. During this time they had three daughters together, Emma, Quinn, and Mattie. Unfortunately the marriage ended in a messy divorce that left the couple unable to coexist. Their daughters moved back and forth between their wealthy father and free spirited mother for most of their lives, but they are all adults now leaving Lila with her second husband, Adam, and son Ray and Robert with his wife Evie and daughter Sasha. Over the course of the summer, the militant divide that was drawn so harshly they alternated weeks on the summer home never crossing paths starts to weaken. Can joy repair their fractured family and find some resemblance of mutual respect, or will tragedy have to strike to make them reevaluate their petty ways? Overall: 3.5

Characters: 4 The characters created some interesting studies and relationships, though some fell flat. There was some issues with developing the characters, though that probably stemmed from the sheer number of characters the omniscient narrator drew to the forefront. I felt most of the development was either missing or rushed.

Plot: 3.5 The plot was honestly why I kept reading. It held my interest and provided some unexpected twists. Seeing the family dynamic change with the eb and flow of events was interesting. Where I nock it is that there were so many things going on, so many plots and subplots it was at time hard to follow, and in chasing certain subplots, I feel the author lost sight of the main goal of the story.

Writing: 3 I personally did not enjoy the style of the book. It did grow into it's omniscient voice into a useful way as the book progressed, but it never lost its sense of heaviness from and over description I found condescending. I subscribe to the belief that you have to trust the reader to form a picture in their mind, so the deep, detailed descriptions, speaker tags, and overall tone was a bit off-putting.
My other issue with this book is how confusing it was at the beginning to slip into. Being presented with the complex family tree at the beginning gave me the urge that I needed to study and memorize the chart. And that would have been helpful. For the first fifty pages or so, I found myself consulting it to try to place all the names to the family groupings. I found it confusing and made it impossible for me to fall into the story. Being introduced to eleven major characters from the very start and having to figure out how they all fit together is a challenge. I understand these characters all had to be present to create the intense fractured family set up for the story, but it might have been better served to focus in on one character and his or her observations/ interactions instead of trying to give each a subplot.