- August 12, 2017
Hello, everyone! So sorry that I completely blipped and didn't post last week! I've been reading a ton and writing plenty of reviews, and I guess I just had a slip of the mind. Anyway, I guess you'll have back to back reviews to enjoy. I got this selection (and tomorrow's) from randomly exploring the library. It's a great way to discover new, great titles, though there is some risk involved. This week illustrates that perfectly as I found one book I loved, and one that really fell flat. Also, just walking through the shelves highlights the importance of eye catching titles and covers because that's what gets me to read summaries of books I've never heard of. So again, I can't believe this post is so late, but better late than never. 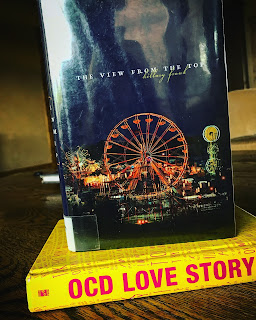 OCD Love Story by CoreyAnn Haydu (341 pages)
Overview: Bea has OCD. She's been in therapy for anxiety for a few years when she finally receives this diagnosis. She's left to sort out what this means to her and her identity alone despite her supportive parents, therapist, and seemingly supportive best friend. But none of them can truly understand what she's feeling leading to strain on her relationships. To make matters worse, her checking and note taking compulsions lead her into trouble with the people it is targeted at. She's been accused of stalking before, but when signs she's falling down the same path crop up, Bea is powerless to stop them and too ashamed to share with anyone besides her best friend who does not understand her OCD and sees it as a harmless game. As Bae grapples with this, she is also confronted with a new possible relationship with Beck, a boy she met at a party who appears in the support group Dr. Pat forces her to attend. Though they both must contend with OCD, it manifests in each very differently leading to strain when one cannot understand what the other is going through despite feeling they should. Overall: 4.5

Characters: 5 Bae is a great narrator. She is able to ground the story in a unique way and lead the reader to both understand and sympathize with her behaviors and struggles that might be looked on very differently from an outsider perspective. Also, very importantly, her OCD does not define her. She has her own personality traits and interests. But she also does a good job of accepting her thoughts and compulsions as a part of her in a very healthy way.
Then there's Beck who is pretty singularly defined by his compulsions. I'm sure if the book was written in his voice he would have much more depth, but Black isn't the focus of the book. He is used as another person Bea has in her life to help her as well as showing his own battle.
Finally, there's Lisha, Baa's best friend. She's an interesting character because she entertains Bea's compulsions and obsessions when they seem cute and minor. She may have even encouraged the negative behavior, but when Bea's OCD gets worse, she starts to shy away from her friend becoming cold and distant because she can't understand Bea, and people tend to shy away from things they cannot understand.

Plot: 5 This was a super entertaining book. Each chapter made me want to keep reading to answer more and more questions. The action moved along at a great pace, and it never felt stale.

Writing: 5 The writing with this book is absolutely excellent. One thing I was super impressed with was the author's ability to write a character with mental health issues while maintaining a light, fun tone that was not disrespectful to the issue but served it because it showcased the other elements and nature of Bea's personality. This also felt like a genuine teenage voice and a genuine, three dimensional voice as well which was enjoyable to read. Both plot and character development was spot on, and Haydu nailed the evolution of the intensity and her coping ability with her OCD as the story progressed. The only reason this story did not receive five stars is that while I genuinely enjoyed reading it and could no fault with this lovely book, I've gotten really picky with saving my Overall 5's for those extra special books that touch you in an indescribable way. And that means to take away nothing from this great novel.


The View From The Top by Hilary Frank (232 pages)
Overview: Annabell is finally finished with high school, and along with that, the town of Normal, Maine. Only, her clean break to college won't be as easy as she hoped. When long existing problems with her boyfriend boil to the surface and her romantic life becomes suddenly complicated, Annabell must sort out her problems before she can leave. She confronts her feelings for the town bad boy, Jonah when he expresses his feelings for her. She also runs into an awkward situation with her friend from orchestra, Toby, which she must figure out. Over the course of the final summer, she must settle her feelings for old friends and make new ones. Overall: 2

Characters: 2 I found these characters not enjoyable in the least. Annabell is flat and seems to have no self esteem what so ever. Matt, her longterm boyfriend, seems borderline verbally abusive, not that this is an issue brought to light, and just a creep in general even though it's said that Annabell is so lucky to have her. Then there's Jonah who is simply the bad boy, bland archetype, and Tobin, the sweet geek who has a heart of gold, who both have suddenly decided they've fallen for Annabell.
Finally, there's Lexi, a girl who struggles with her sexuality and wants to find a way to express that to Annabell, but never does leaving the reader wonder whatever happened there when she's never mentioned again, and Mary-Tyler, a rich girl who meets and spends the day with Annabell getting a narration part for no apparent reason.
These are cardboard characters. I'm fine with taking known or already explored character archetypes and making them your own in some way, but these characters just felt stale.

Plot: 2 I felt like there was no point to the sequence of actions that unfolded. Really, it seemed pointless as none of the events ever peaked my interest or seemed important to the plot of the story. The plot seemed aimless and underdeveloped, and I never understood what the point of the story was.

Writing: 2 Unfortunately, this was a major barrier for this book. The writing felt like a wall blocking me from getting deeper into the narrative or connecting with it on any level. With writing just as stale as the characters, I can't even say that it was written at a reading level for middle grade, it just didn't work here.
Also, the book is split and narrated by a different character each time, though it always remained in third person with the same voice. I feel if a book is split between multiple narrators there should be strong differentiation in voice and a true reason for doing so. Overall, I just couldn't get into this book no matter how hard I tried.

If you liked this article, please share it with your friends and check out our other articles ranging from book reviews to poetry and short stories to editorials. To get updates about new posts and extras, please follow us on Instagram (@readingwritingandme), Twitter (@readwriteandme), and Facebook or sign up for email alerts by clicking the subscribe button at the top of the sight. Also, please leave comments or email us (readingwritingandme@gmail.com) with your thoughts or review requests.