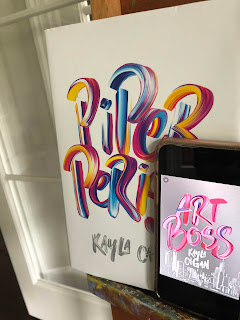 Today I'm doing a little bit of a rewind of a past review to celebrate Art Boss by Kayla Cagan which hits shelves on Tuesday. I met Kayla two years ago at Teen Book Con where I discovered her first book Piper Perish. Appropiatly, because the book is about a group of artists, it is one of the best made hardcovers I've ever held. You will be impressed when you pick up a copy at how much detail is in the cover and inside flaps (and also how substantial it is). Inside, it also includes pictures interspersed with the journal entries which rings true for Art Boss as well. The thing that originally drew me to Kayla's book was it's setting. I used to live in Houston, where the book takes place, and it was amazing to recognize all the places mentioned in the book. I wonder if that's how people in L.A., San Fransisco, or New York feel all the time. Sadly, Art Boss moves the story out of Houston, but, appropriately, Piper's next chapter unfolds in New York City. So before Art Boss comes out, here's what I had to say about Piper Perish!

Overview: Piper Perish is the journal of, well, Piper Perish who goes from high school senior to graduate over the course of the story. The book covers the events of her spring semester of senior year into August after graduation. The main focus of the story is Piper, an artist's, desire to escape Houston where she has lived her entire life and go to New York, where is is convinced she belongs. The road to getting there, though, is much rockier than she imagined. Having to deal with friendship and relationship troubles, her crazy sister moving back in, and finical difficulties, the reader gets to watch as Piper faces and works to overcome each roadblock on the road to success. Overall: 4.5
Characters: 4 I thought that Cagan did a great job creating the cast of characters. Piper had an authentic voice and was a believable character. I guess I'm not gushing with things to say about her because, even though there were some aspects of her I identified with, I never said "Wow that's me." And that isn't anything against Piper, the book, or Cagan, and I know that she is a quality character that people will identify with because I know people like her. Also, I did enjoy reading Piper's journal very much and hearing her take on the world.As for the other characters, they all suited their purposes very well. But as with any journal form (or even first person story really) where the focus is so heavily on the protagonist, we don't see much of the other characters. We only see where they effect the protagonist's life. So I cannot comment much on the other characters beyond saying that they were a well developed group that served their purposes wonderfully.

Plot: 4.5 The second I read the summary, I was sold. A girl trying to escape Houston, where she feels trapped, to follow her dreams? I felt like it was echoing my life. That was my "I completely identify and get this" moment with the book. And as I read it, already eager to see that plot unfold, I was taken by Cagan's various subplot that interwove with the main plot beautifully. The complicated and broken sibling relationship between Piper and Marli. The strain it puts on her relationship with her parents. The upheaval of her once solid friendships. A financial strain that turns into so much more. And that's not even all of it. After the first twenty pages or so, I got sucked into the story.

Writing: 4.5 Writing a story in journal form is hard. While it gives so much freedom for introspection, moving a story using true journal form is hard. And that is where most authors lose me with, if it's done well, my favorite form of fiction writing. But not Cagan. I give her all the praise in the world for executing such a true and loyal to this format book. While there was a few times where it strayed into a bit too much detail for an real journal, I cannot bring fault. Real scenes with quotations are just plain necessary in books, but she balanced them and grounded them with true journal accounts. Also, the attention to detail with the journal form was great. When I first started, I wondered why the emphasis words were underlined instead of italicized before I realized that italics are impossible with handwritten texts. Cagan did a beautiful job managing plenty of tricky technicalities.

Random Notes: First, reading a book that takes place in the city where you live is the coolest. The two other books that I read this week took place in the San Fransisco area, so I enjoyed recognizing the name and really understanding it. (I had to text my friend when it mentioned going to Texas Art Supply. "Like the good one in Montrose.") If you don't live here, none of that really matters, but it was the first book I've ever read that's been set here which made it extra special for me. And by the same token, there is a little section that kind of deals with the cowboy stereotype that I had to send to my friends because I tell her nearly the same thing all the time. Second, I also met Kayla Cagan at Teen Book Con, and she is so nice as well. And if she reads this, I appreciate her reInstagraming my post about Teen Book Con more than anyone can fathom. Hearing and getting to interact with amazing authors is one of the coolest things ever, in my opinion. Third, the hardcover copy is impressive. Not only do I love the cover, but it also has the nicest, thickest, smoothest pages I have ever encountered. It made reading it even more of a pleasure.

Other Books I Read That Week:
Week 4 Reviews: Review Here