Our Year of Maybe 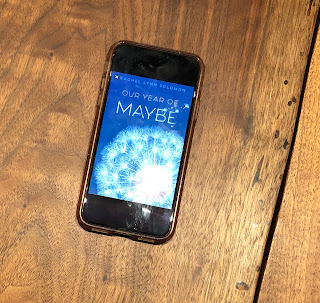 Our Year of Maybe by Rachel Lynn Solomon (January 15)
Overview: Sometimes growing up isn't about falling in love with your best friend; sometimes it's about falling out of love and into yourself. Peter has always been ill. His chronic kidney disease has kept him home from school, and his neighbor, Sophie, has always been his only friend and one of his few rays of sunshine. But then Sophie gives him the greatest gift- a chance at a regular life in the form of a kidney. Once the transplant is complete, Sophie is left in pain, but Peter is finally able to live his life. When Peter finds a band and a boyfriend, exploring his bisexuality for the first time, Sophie feels abandoned and, almost, bate and switched, as he thought contributing the kidney would bring them closer. They push and pull, getting closer to the relationship Sophie wants and then farther from even having a friendship. Overall: 4.5

Characters: 5 I loved Sophie and Peter. Sophie has always given into what Peter wants to do because his disease meant that no one knew how long he would survive. Sophie has blocked out school and activities in favor of putting all of her energy into Peter. She's a dancer, but she hasn't gotten to define herself amongst her peers. When Peter starts to pull away though, she turns to her dance team and starts to own her whims and hopes.
Peter is a pianist. he's also Sophie's best friend. Besides his kidney disease, these are the only things that have defined Peter throughout his childhood. When his parents finally exchange strict rules and tons of presents for more independence, Peter joins a band, recognizes more of his identity, and decides he wants to explore Judaism. Though Peter makes more than a few mistakes, he comes from such an honest place, it's hard not to love him.

Plot: 4 There's a real roller coaster in this one! It's an interesting exploration in the dynamics of male and female friendships and the difficulties that can arise from them. It's also just a heartbreaking look at how sometimes, even when you're best friends, your needs might not always add up.
Besides overcoming their codependency, Sophie learns how to say yes to what she wants for herself, like trying to become a choreographer. She also starts to try for a relationship with her younger sister, even though they feel miles apart.
Peter grapples with his sexuality, which further adds to his complicated relationship with Sophie. Committing to her takes away his chance to really figure himself out, and he can't even decide how he feels about Sophie anymore. He also decides he wants to explore his religion. Because only his father is Jewish, he's never been involved with Temple, but he begins to make an effort to reclaim a part of himself that he wants to be stronger.

Writing: 4.5 The dual perspectives makes the book so much more painful (in a good way)! You can see each of their conflicting emotions and the narrow margins that come between them finding the right common ground. They both have had feelings for each other in the past, but they've never matched perfectly. By the time one person comes around, the other moves on.


Other Books By This Author...
You'll Miss Me When I'm Gone: Review Here