Happily Ever Afters by Elise Bryant: YA Book Review 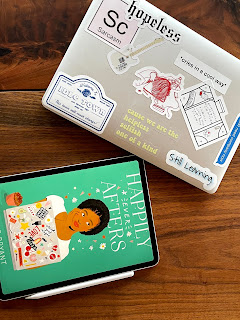 Happily Ever Afters by Elise Bryant

Overview: Tessa gets the writing opportunity of her dreams, but her words run out at the same time. While she can't wait to take a novel writing class at her new school, the idea of sharing her work with anyone but her best friend, Caroline, makes her unable to keep writing, even for herself. Caroline devises a plan to get her to fall in love so that she can jumpstart her creative juices for the romances Tessa writes herself into. Real life inspiration is clearly not the answer, and Tessa is left even further from the answer to all of her problems. Overall: 4

Characters: 4 While I knew this book was going to have a kind of forced dating situation as Tessa tried to get this boy to fall for her, I didn't predict the love triangle till I started reading. I'm not going to fault Bryant for using a love triangle because everyone does it, but I do have to note that these characters fall into the unfortunate side effect of most love triangles. All the characters are annoyingly flat. Particularly the two love interest options, but there's not a super deep level of development with anyone.

Probably the most layered relationship in the book is between Tessa and her older brother Miles. He has Athetoid cerebral palsy, which means that he needs a bit more help around the house than everyone else. He's still perfectly capable of doing plenty and has quite the sense of humor. Tessa can't stand how some people act like he's less than a person when they're around him. Even though there are some unfortunate happenings when Tessa is tasked with watching him, and her parents put more responsibility on her than they should, she never resents her brother. There's such a nuance in their relationship, and it was great to see. At the end of the book, it was noted that the author works in special ed, and you can tell the care that was put into Mile's character. I also loved how Tessa's friends immediately incorporated Miles into their friend group, even after Tessa basically leaves them in the dirt.

Speaking of her friends, they're the other best part of the book. On her first day at her new school, Lenore saves her from an embarrassing incident and then introduces Tessa to her friend Theo. They become her Long Beach backbone and are supportive of Tessa, almost to a fault. While we don't hear much from Theo, he's still more developed than the love interest we're supposed to swoon for. It was frustrating when they got mostly dumped in the second half of the book when it became all about the love triangle. It made me wish Tessa had just stuck with them and found inspiration through their visual art and creativity. It could've been a really cool transitioning to a new school friendship story.

Getting into Tessa herself, she's not given a ton of dimension, which is super unfortunate. She's a writer, but the bits of her writing in the chapters... aren't very good. I've also never seen someone get such bad writers block and then decide to just whine about it constantly instead of sitting down to write until something worked. I mean, my life is extremely boring. When I need something to write about, I go watch a movie or listen to music or read some celebrity gossip headlines and borrow dynamics from there. Also, her issue with writing was clearly the idea that she needed to share her writing with others, not that she had no inspiration. She never addressed her anxiety around that, but suddenly, when she gets the right guy in the end, she has no problem sharing. It just felt like maybe Tessa wasn't in the right place to study creative writing yet, or it should've been a hobby she continued pursuing on the side. Not every writer wants to study creative writing in a school setting. I sure don't.

She was also very passive. She rarely got up to declare what she wanted or do something about a problem in a way that made any sense. It resulted in her not sticking out in my mind as much as someone like Lenore. Even Theo left more of an impression in his couple lines. I did like that her long distance BFF called her out on her self-absorption and how crappy she wound up being to all of her friends at the end. I liked that it brought up the idea of boundaries in friendships and navigating where those fall. Those areas of self reflection brought Tessa to life more, but they were only small glimmers.

So my biggest bone to pick is with Sam and Nico. If Sam was the only love interest, I'd be pretty pleased with him. He bakes, has a celebrity chef mom, is sweet and attentive, and is great to Tessa and her family. The issue is that put in contrast with Nico, he seems super forced and comes off as "look at how great I am" at no fault of his own. There's nothing compelling about Nico. He's bullied Sam in the past, hangs out with horrible people, has an on and off again girlfriend, and has no personality of his own. There's no way to be on this guy's side, so it makes it annoying to watch Tessa chase him for the entire book. There's nothing to make you buy into her attraction. It doesn't even seem like she finds him compelling other than the fact that he looks like the love interest in her book. His only personality trait is that he's a spoiled rich kid who's gotten all of his success bought for him. Also, it bugged me how they were both given 2 scenes with Miles where Sam was great and treated him like a human being and Nico treated Miles like a scary alien. While I get that it was meant to be a screaming red flag in case the reader didn't get it that "Nico sucks and is totally wrong for Tessa", I didn't like Miles being so obviously used. Love triangles can be super gripping, but the two love interests have to be somewhat well matched.

Plot: 3 Honestly, I probably addressed most of the plot in the characters section because I feel like the characters were a symptom of the plot. I did read this whole book in a day, so clearly it was doing something right on the plot front. The story was cute and compelling for a fluffy romance (which was exactly what this book was going for). I'm not going to rehash the entire love triangle thing here, so I'll leave it at that. The friendship and family stories, though more minor parts of the plot, kept me reading.

Writing: 4 The writing is breezy and kept me entertained. Bryant is really good at giving the perfect amount of description in each scene. I could vividly picture every scene and setting, but I didn't ever run into large chunks of description that made me want to skim. The world was worked into the thoughts and the dialogue so seamlessly. I think that it was Bryant's writing that made it so easy to finish the book in a single day. It's the perfect beach read or reset after reading a more serious or intense books. Overall, I really enjoyed it, and I'm excited to pick up whatever Bryant writes next.