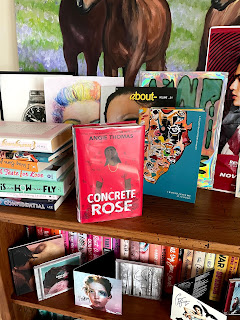 Concrete Rose by Angie ThomasOverview: Maverick Carter is stuck in a big mess. Or two different big messes considering he's close to having two kids at 17. Maverick starts the book finding out he's actually the father of a baby with a girl he can't stand. To make matters worse, she gives him the baby and disappears after finding out he's the real father. Navigating school, his relationship with his girlfriend, Lisa, his new baby, and the politics of the gang he's in makes for a chaotic life. Maverick feels like the rug just keeps getting pulled out from under him, and he has to decide how he's going to cope with oncoming adulthood with far more responsibility than his classmates. Overall: 3.5

Characters: 3 I didn't feel like the character development here was as stellar as Angie's past books. Her last two were five star reads for me, and I was immediately immersed in them. This time, I struggled even though I already knew a little bit about who these characters were already. This is a prequel to The Hate U Give, focused on Star's parents. I believe it's set in the early 2000s maybe? Late 90s?

Maverick is the main character that we follow through the book, and I guess it's just that I didn't click with him as much as the other protagonists in Angie's past books. I guess I struggled to understand some of his choices and carelessness. I mean, teens are infamously careless, but it was just hard to connect with his particular thought process. While some of his issues are unavoidable based on his environment, he brings many problems on himself. He does show a tremendous amount of character growth over the course of the book, and I enjoyed the book far more at the end because of that.

I think my biggest issue was the lack of development of the side characters. We spend so much time in Maverick's head listening to him go back and forth about selling drugs or being there for his kids that we don't get to know characters around him in total depth. Lisa, Star's mom, was my favorite character, but we hardly get to know who she is or why Maverick loves her so much. All of his friends are pretty flat and feel like they're simply there to serve Maverick's story. Dre was the only side character that truly came to life, and his scenes pulled at my heart strings. I think that came from the fact that we see Dre in many different lights, and we get to see him interact with more characters than just Maverick in a meaningful way.

I did like that Maverick has so many positive mentors, even if he doesn't always love that. Maverick's neighbor who owns the grocer allows Maverick the chance to imagine a life outside what he felt he had to do because he lived in Garden Heights. His mom is always there for him, whether with tough love or just love. You can tell she's just always tried her best, and I loved her subplot with Moe. I wish that there would've been more time spent on that plot point. Also, Seven is really cute.

Plot: 3 There were plenty of plot points in the book, but none of them had that pulsing urgency I'm used to in Angie's books. I started getting more invested in the final third, but I just didn't feel super compelled to keep going. The book is mostly quick dialogue, but it feels like we spend a lot of time in Maverick's head or watching conversations where the same points are being repeated over and over. I think after Maverick started acting instead of just complaining constantly as the book came into a close, it was easier to fall into the story.

Writing: 3 Angie's books are usually so immersive and so easy to get swept into. I'm not sure if it was the book or simply my headspace, but I couldn't get invested in the book as hard as I tried (and I really wanted to love it). The book is a quick read. The paragraphs are extremely short, so it made the book easy to keep reading even when I wasn't really enjoying it. Also, I know that the book was set in a different time, but the amount of misogynistic comments that the guys make to each other about the women in their lives was just annoying and frustrating. I get why they were there, but I just wasn't in the mood to read comments like that. I think this book simply just wasn't for me. I've seen it getting great reviews from other bloggers I follow, and I encourage you to read their reviews too. I think Angie's past work speaks for itself and her place as a premier author in the YA community has already been cemented. This just didn't end up being one of my favorites.

The Hate U Give