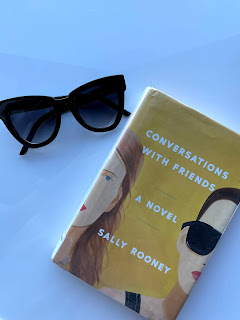 Conversations with Friends by Sally Rooney

Overview: Frances is 21, in university, and lost in life. She does not aspire to have a career, even though she really needs money. She doesn't have much direction at all. Her current friend and ex-girlfriend, Bobbi, was always the special one in Frances's mind. When a writer wants to profile them after seeing them perform Frances's spoken word, Bobbi and Frances are thrown into the lavish world of this writer and her actor husband. With an affair, messy parent relationships, and a whole lot of confusion, the book is both drama filled and plainly spelled out life of a girl trying to figure it all out. Overall: 3.5

Characters: 4 These characters are definitely better than the two cardboard cut outs that populated her second book, Normal People. Frances is bi and navigating what that identity means to her further after getting out of her first committed relationship. I feel like I don't know Frances super well despite living in her head because she's always stating how she feels or trying to suppress how she feels instead of showing it. Frances makes a frustrating habit of avoiding feelings at all cost, never saying what she means, and often doing or saying the opposite of what she wants for no apparent reason. While there are definitely people in the world who have similar personalities, it makes for an incredibly frustrating main character to follow and a hard one to cheer for. I did like that the book showed Frances getting diagnosed with endometriosis and navigating her very intense symptoms over the course of the book. I've read a lot of books and never seen endometriosis or reproductive health issues really discussed, so I appreciated that part quite a bit.

Bobbi is kind of the guiding compass through the book who grounds the story and clues the reader in to when things have gone too far. Bobbi is the performer. She has that magnetic personality that doesn't necessarily make everyone like her, but they are drawn to her. She guides the spoken word parts of what Frances writes. She broke up with Frances, and though they stayed friends, it still did a number on Frances. Frances idolizes her and sees her as larger than life, like she'll escape the monotony of our world because she's so special. Bobbi is always quick to bring her down to earth and shatter the illusion of Frances's writerly infatuation. She also gives small warnings throughout the book to Frances about her affair. While Frances rationalizes it for the reader pretty well, Bobbi does a good job of reminding you of the total toxicity of being inside the relationship and not able to see the bigger picture.

Then there's Melissa and Nick, the married couple at the center of the book. Melissa is pretty bland. She just seems a bit bitter and mean and disengaged. Frances is not a fan of Melissa, which probably adds to this. Bobbi is originally infatuated with her, but she later takes off the rose colored glasses about the writer. Nick is the half we spend a lot of time with. He's very passive and also does not enjoy talking about his feelings or asserting what he wants for real. The thing I can't stand most about the relationships in both of Rooney's books is that there's never a building of emotional connection or depth between the couples. It's less pronounced in this book, but it's still annoying. Nick feels like a ghost to me.

We also learn about Frances's parents. She spends lots of time with her mom and grapples with her father's alcoholism and having to put up boundaries when it comes to loving a parent. There's also another couple that often hangs out with Melissa and Nick that build up the world. These side characters definitely work to build a richer world than what existed in Normal People.

Plot: 3 This book is interesting because nothing happens and everything happens all at once. Summarized in a few sentences, it all sounds quite dramatic. These artists fall into this rich people world, the main character has a affair with a married man, they're on again off again, and there's so much angst. They break up and make up. It's a whole rollercoaster that you can't quite cheer along. But the thing is, all of this happens slowly and over the course of many repetitive scenes. I did find myself caught up in these chapters and wanting to get into the next one, but it just doesn't have a strong sense of urgency. The plot feels kind of rainy and gray.

Writing: 3 I find Rooney's writing very jarring, especially at the beginning. Her books always start in the middle of scenes, and it's extremely hard to find your footing for a while. It always takes a couple chapters for me to get into the actual story and over my confusion. Also, the lack of quotation marks adds to that. You definitely get used to the style by the middle of the book, but it's still a challenge at the start.

I also just feel like the book does so much telling and very little showing. There isn't much rumination or conversation on emotion in the book. Characters often reach emotional high points, and instead of looking for resolution, they walk away or change the subject. Everything feels both intense and incredibly removed at the same time. The book has no urgency, which is weird coming from YA.

I definitely enjoyed this story far more than Normal People, and I feel like the story was better articulated. Of the two, I would definitely recommend this one, and even if you didn't like her other book, I'd give this a try if you were curious. I picked it up on a whim from the library based on a friend's recommendation. I switched over to this one because I'd been reading one YA book for two weeks and felt totally stuck. I wanted something different but still fiction, and this definitely delivered. I think Rooney's books are still a good choice if you're looking to cross over from YA into more adult fiction or if you're looking for college aged characters. But it does make me appreciate the visceral voice of YA. Also, it ends on such a twist cliff hanger that I'm already frustrated that I'll never get answers.

It proves to be a good reminder that adult fiction doesn't center around learning lessons or finding answers the way YA does. In literary fiction, sometimes the grand ending is repeating the mistake you just worked through for like 6 months leading up to that moment. It's definitely messy.