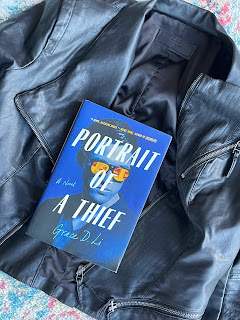 Portrait of a Thief by Grace D. Li
Buy the Book via Bookshop!
this post uses affiliate links which means I get a small commission from your purchase at no cost to you! learn more here.

Overview: Five Ivy League college students. Five priceless zodiac head sculptures to return to China. One massive heist plan. Those are the parameters of the book as these new adults hatch a feeble plan to return the stolen art to China from Western museums and claim their $10 million a piece prize. While they each have the smarts and skills to pull it off, none of them are trained thieves, and with a tight clock and the united police agencies of the world after them, there's much at stake for these five who could win or lose everything. Overall: 4

It makes my heart so happy to see college protagonists hitting the NYT Bestseller list. I hope that this can be yet another sign to publishers that Red, White, and Royal Blue was not a fluke and that so many of us are craving college aged and early 20s main characters to relate to. This was the first book I've picked up in a long time that I was able to directly relate to. aThey were forced to examine things like passion vs stability in career choices and how to find hope and happiness while staring into the big, scary abyss of the adult world. That's probably why this is the first fiction book that I've picked up in months. As much as I love fiction, I think I've shied away from it because it can rarely provide the direct solace I'm used to.

If you normally don't go for thrillers or heist stories, fear not. This book is much more of a contemporary novel than it is a story about robbing art museums. I personally would've loved to see the heist planning and execution in a bit more detail as those scenes felt rushed and like afterthoughts to the larger story, even though they were essentially the central plot points. I struggled to figure out the logistics of the heists they pulled off and how they were able to actually execute these relatively simple smash and grabs in these extremely secure museums. This is a book much more about navigating family identity and a sense of belonging over stealing art. This book simply has fun, hooky premise for people who want something a little different but want to stay true to their contemporary roots.

I loved how nuanced the character's paths were and how even though they were all Chinese American that they had totally different experiences navigating that. The ways that they related to and differed from each other created really wonderful character group dynamics to follow. I wish this would've gone deeper, though. The characters often fell flat for me as I couldn't fully get inside of their heads because the chapters often skipped around and sometimes struggled with losing focus. Most of their development existed around one central piece of life they were individually struggling with, and this issue was often rehashed without much growth. It made it a bit difficult to pick out the details around how they felt about each other and the different relationship webs that existed between them because of their other preoccupations. I just wanted every aspect of this story to reach a bit further in providing fleshed out details.

Scenes often felt rushed or incomplete, and I sometimes struggled to follow what was happening in a particular scene because the dialogue was so spaced out between long chunks of description. I did appreciate that the chapters were brief, though, which made it easier to move through, and it was nice to get to have perspective chapters from all five of the group members since their worldviews and views of the heist were all so wildly different. It allowed a few opportunities to get to know these characters on a slightly more intense level than they were ever able to reveal to each other.

All in all, I enjoyed the story and getting to spend time with these characters. I also loved that Lily, my favorite of the group, was from Galveston and that in real life Grace grew up in Pearland. Having grown up in and around Houston in my early childhood, nods like that are always fun since Houston rarely gets love in the book settings realm. It's one of the first physical books that I've managed to finish all semester, even in the thick of finals season, which should say a lot. If you want a quick, fun read that'll make you think, I say give Portrait of a Thief a try and support some awesome college characters.

Also, shout out to Grace for paying to use the "Bad At Love" lyric towards the end of the book. 10/10 karaoke song choice, especially for Irene.