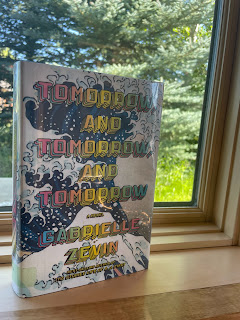 Overview: Sam and Sadie's lives crash into one another over and over again through a series of decades. It starts in the hospital at ages 11 and 12. They collide again in college, and from there, their lives become irreversibly intertwined. While they fall in and out of a bond that feels somehow more than friendship but can only be defined as such, there's a knowingness that they have to come back together. During their close times, they make a PC game that changes their whole worlds and that of the gaming industry. They launch a company together. They create and they fight and they cut each other out and they come back. This story is about the ebbs and flows. Overall: 5

Characters: 5 The main characters in the book are Sam, Sadie, and Marx. Sam and Marx go to Harvard. They're roommates, thrown together by some random fate. After getting into a bad car accident as a child, Sam has dealt with severe problems with his foot that significantly impact his life. Despite his best efforts to hide it, Marx quietly steps up, taking care of Sam in small ways Sam appreciates without a word. Sadie goes to MIT to learn about game design and gets swept up in a cutthroat industry that's inherently biased against women. She's smart and determined but is prone to getting in her own way.

We see them grow up in the 80s, navigate young adulthood in the 90s, and figure out what it means to not be the youngest in the room anymore as the 2000s turns into the 2010s. They suffer major losses and huge wins – both of which are equally liable to tear them apart. Marx is the organizer, the facilitator, the one that keeps the wheels turning on the practical side, though he has a creative heart and a passion for theater. Sam is the dreamer. He's seen so much darkness, but he also has such an open heart and willingness to try and try again. Sadie is the genius who often gets in her own way under pretenses, expectations, and a bit of a pretentious outlook.

Plot: 4 I adored tracing this story through so many lifetimes through such an interwoven story. I couldn't put the book down and read it in two days. There's the perfect amount of room given to the characters for their development to take center stage while also creating incremental stakes that left me wondering how they'd clear the next hurdle.

There is one major plot point in the final third of the book that I disliked. In my opinion, this tragedy could've been avoided and the book would've ended in the same exact place. Maybe not exactly the same as the book will get you to seriously mull over the butterfly effect, but the message and feeling would've been similar. The section and its repercussions felt a bit ungrounded and overblown for this quieter, contemplative story. The plot was moving along fine without the inclusion of this point, and it did briefly sour the immense amount of love I have for the book. Ultimately, the ending won me back though.

Writing: 5 This book is one of the most unique studies of storytelling I've ever encountered. In voice, it somewhat reads like a John Green book for adults (unsurprising after I noticed the John Green blurb on the back) in the sense that the writer luxuriates in language and thick, beautiful prose without worry for how the reader might receive it. The book languishes in ideas, mulling them over to the fullest degree, unconcerned with how long a paragraph has become.

The book is written in an omniscient third person that still feels incredibly intimate and close. We get to live in all of the characters' heads at once while never getting confused about whose lens we're watching from, even if we experience many of the character's perspectives in a single chapter.

There's also a blending of timelines and a masterful use of foreshadowing and callbacks to play the reader like an emotional violin. While the story is deeply grounded, conscious of developing a clear time and place, it's not tethered to a linear timeline. Stories are told as flashbacks to fill gaps in the present moments, and while it's largely chronological, the author doesn't shy away from skipping forward or back as needed. The entire book, even when feeling very present, is communicated with a sense of knowingness, and an absolute abundance of details are woven together with the keen eye of a mystery writer offering readers who accept the invitation a chance to piece together what might happen next while still delivering surprise after surprise.

While the personal lives of Sam, Marx, and Sadie are fascinating, so is the larger narrative around what it means to tell a good story, how one faces living a creative life and monetizing that as a profession, and the power of escapism. These characters invite an exploration of how difficult it can be to create a satisfying sequel and how sometimes, the more you know, the harder it is to successfully create. The book fearlessly tackles all of our darkest worries and reservations about life, and while it obviously can't answer unknowable questions, I was left with an undeniable sense that it came closer than nearly anything else I'd experienced. Everything in this book is so rich and full of thought and detail. And like the games that the characters create over their lifetimes, this book is also a game you start to learn, growing better and better at gathering the tiny details that will matter in the long run and realizing how to steal the parts you need most from the text.