Funny You Should Ask by Elissa Sussman: Romance Novel Review 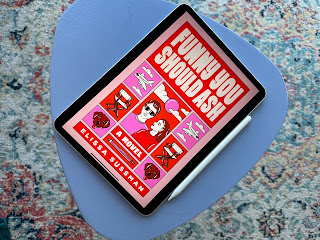 Funny You Should Ask by Elissa Sussman

Overview: Chani Horowitz writes for a celebrity focused online website. It's not an esteemed publication, but it (barely) pays the bills, and it sometimes lets her talk to cool people (like her longtime crush Gabe Parker). When she sets out on her interview with Gabe, it turns into not just a lunch to get content for her profile but a whirlwind weekend where Chani attends a movie premiere, a famous person house party, and ends up in an awkward but exciting position with her subject–all before running off into the night without a goodbye. The article that results makes Chani's career, but it comes with an unintended trade-off. The book follows Chani through that fated weekend as well as a parallel one ten years later. Overall: 4

Characters: 4 Gabe and Chani are likable enough. There's a bit more depth that I crave from the side characters like Gabe, Ollie (Gabe's movie star best friend), and Chani's shitty sometimes ex, sometimes boyfriend, sometimes husband. Chani herself has a fair amount of nuance as she navigates insecurities around both her relationships and career. She grapples with her craving for fame against her frustrations with receiving the wrong kind of notoriety from people gossiping about what did or didn't happen during her profile. She also carries a deep insecurity that she's not good enough at her job as she isn't a bestselling novelist like her partner (and, boy, does he love to remind her of that). Given her unfortunate partner, she's also confused in love as she finds this instant connection with a person she sees as unattainable and then has to grapple with that connection for ten whole years.

Gabe is dealing with his own insecurities. We meet him as he rises to fame, scoring the role of James Bond. He has to fight the assumptions that he's not intelligent because of his beginnings in Montana and his turn in community college, and he worries people are right that he doesn't deserve his success. Chani is one of the few people in his life that doesn't approach him with an air of judgment.

The only supporting character of much note is Ollie. Ollie is another famous actor who's worked with Gabe and became his best friend. While Ollie does have a story that progresses, and I loved seeing the friendship he forms with Chani, there was something ungrounded and not quite fully realized about his character.

Plot: 4 The book has a structure made to keep you reading, and it generally handles the interweaving timelines well. We read in the past and present day, alternating back and forth with chapters mirroring the events of one another as Chani and Gabe retrace the steps of their first meetings all these years later. It becomes somewhat formulaic where we get the full story of what happened in a few hour span in the past, and then in the present chapters that follow, Chani and Gabe directly go about resolving those particular issues that were just raised. It's fine, just a little predictable. I also think the pacing could've been quickened. It felt like half of the novel was simply going back through worries or questions that were already either partially resolved or already heavily discussed which got a bit tiring.

Writing: 4 The writing was pleasant and fit perfectly well for a fun romance read. I think the issue that I run into is that it felt like it made certain efforts it didn't totally fulfill. It strayed far enough from focusing on the romance and delved into career and questions of navigating your 20s enough that it seemed meant to create larger takeaways and messaging it didn't quite nail. And on the romance front, I never really understood why Gabe and Chani were these soulmates. It's just implied that they're meant to be from the start with very little compelling information as to why. There are a few clunky, awkward conversations, but mostly, you just have to accept the insta-love trope for the book to work. Again, I was reading this for fun and the curiosity of being able to read about an entertainment journalist (and I just learned about the real profile it was based on which made me more intrigued), so none of this really took away from my enjoyment, but on reflection, there was room for these aspects to be more satisfying.

I did enjoy the element where each chapter ended with some kind of external piece from the world. It starts with excerpts of Chani's original piece on Gabe. It goes on to include reviews of Gabe's movies, reviews of Chani's books (from legit publications all the way to good old Goodreads), and excerpts of various other profiles with the two over the years. I'm always a fan of extras being included in a book, so this will always gain points in my book.

This is a fun beach read, and it did keep me coming back despite being ridiculously busy. I've struggled to consistently read, let along finish, a book since school started, so Funny You Should Ask is definitely doing something right because I did explicitly make time to read it.