No One Asked For This by Cazzie David: Nonfiction Book Review 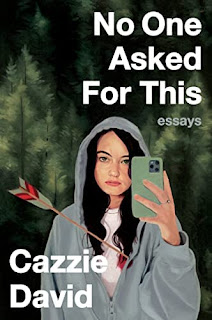 No One Asked For This by Cazzie David

Buy the Book via Bookshop!

this post uses affiliate links which means I get a small commission from your purchase at no cost to you! learn more here.

If you are unfamiliar, Cazzie David is the daughter of Larry David, best known for the TV show Curb Your Enthusiasm. It's a show I've never seen. The other notable thing about Cazzie David if you've never heard of her is that she was dating Pete Davidson just days before he got engaged to Ariana Grande during that whirlwind moment in 2018. She's also a hilarious and gifted writer.

While I'm rarely a fan of celebrity books, No One Asked For This joins the ranks of I'm Glad My Mom Died by Jennette McCurdy as a celebrity book well worth reading, and one I'd love a follow up to. Cazzie's essays stand up on their own. I haven't read many essay collections before, and it's an interesting way to handle a memoir of sorts when you're still in your twenties.

There's hilarious essays about dating, dealing with your parents and siblings, figuring out what you want to do with your life, and coping with your ex starting to date someone very famous the day after you break up for good (clearly, some of the topics are more niche than others). The essays are entertaining whirlwinds full of dry, witty writing and a cynicism that spoke to my soul with a little bit of hope dashed in. Cazzie is an extremely anxious person, and that becomes a center point in nearly every essay. When I read the essay about how she moved in with her dad because he was dying (not of illness or anything else, just by virtue of the fact that he is also alive) and she needed to soak in every possible second with her favorite parent, I knew that I wasn't just enjoying the book because it was interesting. I was being seen. Occasionally too seen. But it's rare to find someone who happens to have the exact same flavor of anxiety that you also carry around, and it's a delightful moment of kinship when you do, regardless of the venue you discover it.

As a sometimes lost and sometimes lonely nearly twenty-something who's lived most of her life spending way too much time on the internet, I was the perfect audience for this collection. It's definitely not for everyone, but no book is. I had a lovely time spending a few days soaking in Cazzie's words before bed, on the train, and in every other random spare moment because I didn't want to put the book down. I'm glad that it randomly occurred to me to read this 2020 release all these years later.

mentioned in the review: