My Adventure at Teen Book Con: What I Learned 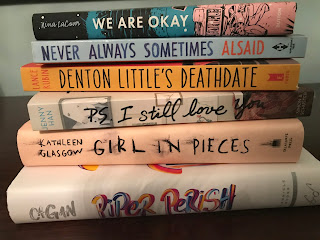 Teen Book Con was a blast! I had a great time. Lani Taylor gave an amazing Keynote that set the tone of a great day of fun and learning from some epic, accomplished YA authors. So from my notes on each of the five panels I went to, I'm compiling a list of top helpful writing tips for aspiring authors as well as some interesting questions that were asked about the behind the scenes of what goes in to publishing a book.

On Writing a Book:

1) Where do you get your ideas?
Both Benjamin Alire Saenz and Katherine McGee weighed in on the question and gave similar answers. Observing people is really the greatest tool for finding story inspiration and building characters. I completely agree with this.

2) Do you plot or just write?
All of the authors had totally different answers to this question. Nina LaCour said she writes snippets that come to her and then pieces them together into an outline and later a story. Kathleen Glassglow said she has to write out the whole novel before she outlines. And Len Vlahos said that he waits till the novel is formed in his head before he writes it.

3) How do you stay with a story?
It was the authors general consensus that you just have to push through the inevitable rough spots if you really love the story.

4) What is the most difficult part of writing?
Of course, this is unique for everyone, and that was represented by the panel's responses. Nina LaCour said that it was the middle slump of the first draft. Kayla Cagan said that it was letting go of the characters at the end, and Benjamin Alire Saenz said that it was all hard, but that's what he loves about it.

5) Tips for authors stuck in revisions.
Katherine McGee and Benjamin Alire Saenz both agreed that getting feedback from people you trust is imperative to realizing what the problems are.

6) Advice for coping with writers block.
There were many different tips given throughout the day to this popular question some include:

1) What are the most important things to give characters to bring them to life?
Lance Rubin suggesting giving them specific quirks and details that can be drawn from real people. Kim Savage said that making the narrator unreliable gives an interesting twist. And Nina LaCour said the most important thing is to love every character. She also says that mixing unexpected traits can work well to give dimension.

2) How do you develop a character arch?
Kim Savage said that the characters should grow a bit every chapter. They need to face plenty of obstacles. Nina LaCour said that characters growth should solidify or uncover a trait that the character had unrealized from the start. And Lance Rubin shared that it's okay to discover that as you write the first draft and really hone it in the subsequent rewrites.

3) Tips on writing the antagonist.
Nina LaCour says that your have to love your antagonist just like all your other characters. You have to find the good in them and twist it. You must understand the why for all their actions.

4) Tips on communicating appearance.
Lance Rubin said that thinking about how you would describe real people's faces can be helpful for writing good character descriptions. Nina also said that using a small amount of physical description is okay. Also, always remember to look at the characters through the eyes of the main character and use their relationship to bring out certain aspects of the characters which I think is amazing advice.

On After the Writing:

1) Is writing the hard part or is it publishing?
The general consensus was that starting with a blank page to fill is the hardest hurtle.

2) How much say do you get over your covers?
It really seems to very based on author and publishing house. Jenny Han is very involved in crafting her covers while Benjamin Alier Saenz and Katherine McGee get no say over their covers. It seems that most authors don't get much say and their opinions of the final product very greatly.

3) Would/ did you hesitate to make your book a movie?
Angie Thomas was very honest. I loved her answer. She said that she did hesitate quite a bit because so many adaptions suck, but getting to be very involved has put her mind at ease. Jeff Giles said that he would be open to it. Alexandra Bracken said that she was hesitant but happy that they are doing it. She is entirely hands off.

And Finally the Number One Question:

Best advice for aspiring authors:
So there you have it, my experience with Teen Book Con. Getting six books signed was incredible. All of the authors were SO nice especially Kayla Cagan and Nina LaCour. And I am super excited to read their books. Look for the reviews of my new books for the next two weeks. Below I'm going to list out the authors I saw and the books in case you want to buy any of them. And if you're in Houston this time next year I would defiantly recommend going!