- September 27, 2017
Hello, everyone! This week I have two great books, Words In Deep Blue  and The Sun Is Also a Star. Also, on Friday, before We All Fall Down comes out, I'm going to share what I think. And, finally, I'm going to share about my super packed October in a Coming Up This Month post on Saturday! Until then, here's the first part of the weekly reviews, and in the links below, I've added the links to last week's reviews. Don't forget to read and check out A Short History of The Girl Next Door which is out now! 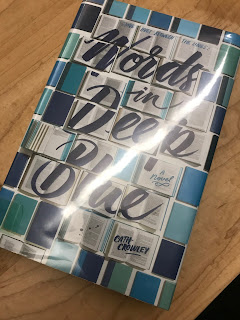 Words in Deep Blue by Cath Crowley (269 pages)
Overview: A second hand bookstore, two former best friends, and the vast Australian ocean come together in Cath Crowley's new book Words in Deep Blue. Rachel is moving back to Gracetown after three years away in the wake of her younger brother's death. Once back in town she is forced to confront everything she'd gotten to leave behind: her former best friend and his snobby girlfriend, her old friend's she'd abandoned, and the realities of her old life. After she is forced to take a job in the second hand bookstore where Henry lives and works, the two former friends are forced together both by proximity and Howell's famed Letter Library. Overall: 4

Characters: 4 For the most part, I found the characters well developed and interesting, especially some of the more minor pairs and their dynamics. I loved Henry's parents as characters, their struggles with their failed marriage, their lingering feelings for each other, and the conflict over what to do with their business. I also really enjoyed the stories and personalities of Henry's younger sister George, new higher, Martin, and Rachel's younger brother, Cal.
As for the two point of view characters, I liked Rachel for the most part. She was relatable though sometimes plane, and Henry was interesting for the most part, but the choices he made (which I'll go more into detail with in a second) didn't make much sense. The one character that came off entirely flat was Amy, and I guess her boyfriend Greg. They were the antagonists, and Crowley didn't seem interested in crafting them like the other characters though it would have served the story well.

Plot: 4 The plot as a whole, though somewhat predicable and simplistic, was good. I was engaged throughout the story, though if you despise love triangles, I would avoid this book. There are two in the story, one that was executed quite well in my opinion and one that floundered from underdevelopment. My favorite was between three of the more minor characters, George, Martin, and the mystery letter author (though you'll be able to get the identity from the start). In this, George's conflict between waiting for letters that had ceased from a mystery boy and plunging for what she wants right in front of her is played out beautifully.
Then there is the one between Rachel, Henry, and Amy. It was the thing that destroyed their friendship before she left town and continued to ruin their relationship and other facets of Henry's life after Rachel's return. My problem with this dynamic is that Crowley provides no reason why Henry would like Amy beyond the fact she was beautiful (though she mentions Rachel is stunning as well). Amy is always shown as mean and horrible to Henry while he constantly tries to win her back and jeopardizes his relationship with Rachel for it on multiple occasions. This was frustrating as the answer to why he behaved this way was never explained.

Writing: 4 I'll start with the things I enjoyed about the book. I found Crowley's writing very pretty and poetic. It painted a picture in my head with ease. I also have to applaud her for her ability to develop a character that died before the start of the book. Often it is a struggle to craft a deceased character so that the audience understands and feels the same way the characters who knew him did. Through the letter library we come to really understand Cal and his position in the world.
Where I found a bit of an issue in this book was the development. Where some parts are just beautiful, surrounding the main character's actions is severely underdeveloped. It seems many of their actions concerning the other main character is done on a whim or entirely unjustified by the text.
Overall, I thought this was a good book set on a continent I'd never been too. There was a new and interesting rhythm to the storytelling as well.