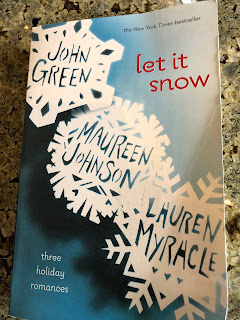 Because I just got back to the snow after a long time away, I thought I'd post my frigid review of Let It Snow.
Let It Snow by John Green, Maureen Johnson, Lauren Myrachle (352 pages)
Overview: Three different short stories come together to create one all-encoupacing Christmas narrative. The story starts with Maureen Johnson's "The Jubilee Express" where Jubilee is sent on a train to go stay with her grandparents for the holidays after her parents get arrested at a Christmas decorating convention on Christmas Eve. Yes, I know it's strange, bear with me. Then her train crashes, and she walks across the interstate to a Waffle House where she meets a boy named Stuart who takes her on a three mile walk to his house to warm up. They fall into a frozen creek on their way. The story continues on the same strange trajectory it starts.
Then there's John's contribution, "A Cheertastic Christmas," which involves the manager at the Waffle House Jubilee walked into calling his friends about a group of cheerleaders from Jubilee's train. His friends jump in the car to drive through the blizzard to win a race in order to get to hang out with the cheerleaders. It turns out to be a wild goose chase with lots of snow related disasters.
Finally, it wraps up with Lauren's story. It's about the ex-girlfriend of Jeb, a boy Jubilee crushes on on the train. She's distraught and whining because Jeb doesn't show up to Starbuck for their reconciliation after he broke up with her for cheating. And she acts like it's his fault. Honestly, I can't say any more about this story because I quit halfway through, but I think I read enough to predict the end. I'm still not exactly sure what the point of this novel was. Overall: 1.5

Characters: 1 I found the characters in Maureen's story flat. Jubilee had a bit of dimension, but she was too chalk full of cliches to really appreciate anything else. I also have a problem with the fact that Maureen introduces the airhead, one dimensional cheerleaders for all the male characters in the later stories to ogle and female characters to bash. It felt outdated and unnecessary.
John's characters were the only characters that had any trace of life. Though the two guys did their fair share of ogling and the female lead, the Duke, who the guys don't look at as a girl, Green addresses these behaviors and dissects them so that the characters are forced to confront their behavior.
Finally, it was the characters, as well as some of the plot, that finally made me give up on the book by the time I got to the last story. The main character and her friends are so cardboard they're close to parodies of themselves.

Plot: .5 As you can see from the synopsis, the plots are a bit strange, reliant on stereotypes and are neither compelling nor particularly entertaining. Porcelain Christmas Convention arrests, trains running off the tracks, cheerleaders at the Waffle House, and an epic race to be the guys allowed to watch the cheerleaders play Twister, is a bit ridiculous. Actually, a lot ridiculous. If it wasn't for the Duke's character, I would wonder if any of the authors had any amount of respect for women despite the anthology being mostly written by them.

Writing: 1.5 I have always loved John Green's voice, and, even with this story, his writing style is irresistible. I got some strong Alaska vibes from it (Maybe it was a "The Colonel"/"The Duke" naming situation?). He also was the only author who didn't seem to take the story seriously, which was necessary for the level of shenanigans inn the book. He admitted it was ridiculous, and, by addressing it in the story with the characters, grounded the book in a way that made it readable.
Maureen had the next best structured and executed story, but she couldn't seem to keep her characters from spiraling into cookie cutouts. I found the story to be mediocre.

If you liked this article, please share it with your friends and check out our other articles ranging from book reviews to poetry and short stories to editorials. To get updates about new posts and extras, please follow us on Instagram (@readingwritingandme), Twitter (@readwriteandme), and Facebook or sign up for email alerts by clicking the subscribe button at the top of the sight. Also, please leave comments or email us (readingwritingandme@gmail.com) with your thoughts or review requests.