Nothing Left To Burn 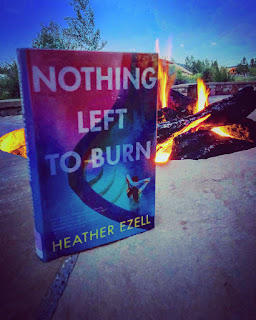 Nothing Left To Burn by Heatger Ezell (322 pages)
Overview: There's a fire burning Orange County to the ground, and Audrey knows what started it. She's woken up to an evacuation notice and then learns that her sister collapsed at her ballet audition about an hour away. Audrey is scared the cancer has come back to take her sister. She also has her firefighter boyfriend, Brooks, to worry about, though the fire seems to be the high point of his life. Throughout the day and in flashback chapters of the summer, Audrey must figure out how to piece together what's left of what the fire burnt to the ground. Overall: 5++++++++++++

Characters: 5 Wow. I think that I love and identify with Audrey more than any character I've ever read. She's a bit trapped in her own head and stuck between intensities, a devout dancer till she walked out of the audition of her ballet career at fourteen. A controlled, quiet impulsiveness courses under his skin, and, though it doesn't show often, Brooks lights this element of her on fire.
Brooks is a mysterious loner both feared and revered around the school. When he takes an interest in Audrey, she realizes she might like him as well. Though his brokenness and troubles quickly become apparent, Audrey twists every red flag to add to the Brooks she wants him to be instead of a pyromanic, habitual liar. Audrey sees the world so clearly that she's only able to filter it later.
I also love the organic and well placed use of her family, including her sister who she has a wonderfully close relationship with and a best friend who always supports her no matter how far Audrey pulls in and out.

Plot: 5 Pacing is on point with this novel. The short chapters that alternate and shift through time seamlessly. We get to go through summer, the three days leading up to the evacuation, and an hour by hour hit of what happens in the wake of the fire dropping in containment. Each chapter builds perfectly, and though it has cryptic moments, Ezell never makes the reader feel frustrated or deceived.

Writing: 5 I will read every book Ezell writes because she nails every aspect of writing to the point where you forget that you're reading. It's like living and breathing in the smoke with Audrey as her world unravels. Everything is just so real and immediate and brokenly perfect. And I love it.