The Way You Make Me Feel 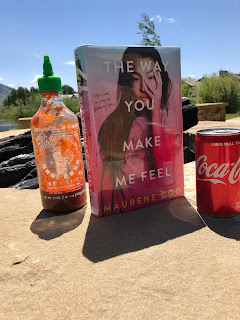 The Way You Make Me Feel by Maurene Goo (320 pages)
Overview: Clara shin is the self proclaimed class clown. She's good, but sometimes she takes it too far. Like at Junior prom when her Carry inspired stunt after winning prom queen turns into a brawl with Rose, the junior class president, and the cafeteria up in smoke. Since Clara is immune to school punishment, her father and the school board decide that Rose and Clara will spend all summer working at the KoBra, his food truck to pay off the damages. Is there a chance it won't be totally miserable? Overall: 5

Characters: 5 Clara is infectious. From the first word, I knew was going to love the book. Her voice and humor pick you up and wrap you tight so that you're living in Clara's mind, not just listening to her story.
Rose, the uptight, beautiful ballerina-class president, makes for a great advisory turned tentative friend for Clara because they reflect the parts of each other that they spend so much time to hide. It's a great female friendship story. She also contrasts Clara's other friends and fellow pranksters, Felix and Patrick.
Hamlet, the cute boy at the coffee shop stop, also pulls interesting parallels to Clara which allows both the readers and Clara to uncover new parts of herself.
Finally, and most importantly, there's my tied for favorite characters, Pai, her father. Her parents moved to LA from Brazil to have Clara when they were teens, and Pai has been Clara's sole parent for as long as she can remember. He's kind and hilarious and the perfect father to both nurture and challenge Clara as she matures. Her mother jet-sets around the world as a social media influencer who she rarely sees, but when she does it's thrilling. Sometimes Clara has a hard time seeing and appreciating what her father does for her, but her contrasting parents give her an opportunity to learn about the real depth of love.

Plot: 5 This book was so much fun; I could not put it down. Watching Clara and Rose learn about the food truck was both interesting and entertaining. Beyond that, the story is so heavily rooted in Clara's self discovery that with every chapter we uncover a new and more authentic side of her as she becomes more confident in herself.
One of the things that makes this book so cool and irresistible is that it's deeply character driven, but it unfolds along a narrative of a lighter contemporary giving it both a page turning, smiling effect with deeper nuances that make the story impactful.

Writing: 5 I'm definitely picking up Goo's other title the next time I'm at the library. She's one of the few authors you find who can throw a genuinely complete story onto the page. Real life that's entertainment, complete in equal measures on the aspects that make us people. Her subplots on friendship, family, and romance all held their own weight with one another and served a thought through purpose. Every word on the page was 100% justified.
And I can't even really comment much on the voice of the novel because it blew me away so much. There's no having to understand Clara. Even though I'm not Korean or Brazilian American, I don't live in LA, and I'm not hilariously outspoken, I felt at home with her and instantly wanted to be best friends. That's the thing I love about books, they give you the chance to meet so many cool people from places you've never been all without leaving your living room. I can't speak highly enough about Goo or this book.