Spotlight Review: A Flicker in the Clarity 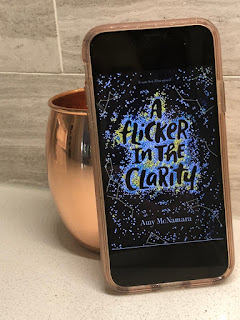 A Flicker in the Clarity by Amy McNamara (June 12)
Overview: Evie has always been there to catch Emma when she spirals off the rails. In fact, she spends most of her time worrying about her best friend and maybe even dreaming of having Emma's carefree attitude and oozing charm. But Evie knows that Emma doesn't always make the best choices, from dating guys well her senior, sneaking out at night, skipping school, and shoplifting. Evie also knows that Emma's never been the same since her older brother, Patrick's death.
While trying to stay one step ahead of Emma to cover for her, Evie is starting to realize that she could be the star of her own life as well when she meets a hot tour guide on a school trip the the Brooklyn Bridge. While Theo may not be perfect, he makes Evie realize that she too can be special which is something she'll need if she wants to put out her art for contests like her teacher recommends. Overall: 4.5

Characters: 5 The characters were my favorite part of the book, which luckily goes a long way with me. I loved watching self sacrificing Evie come to realize that she could be as important as everyone else in her life, a realization all charitable people need to have. This doesn't mean she stopped supporting her friends and mom, just that she realized her life was as important.
As I mentioned above, her love interest, Theo does come into play to help her on her journey, but, if you're looking for a book heavy on romance, I'd turn elsewhere. This story is firmly rooted in Evie discovering herself and her friend group including Emma and Jack, a boy who's gone from crush to best friend and back again too many times to count, as well as Jack's new girlfriend who threatens Evie's bestfriendship with Emma.

Plot: 5 I enjoyed getting to read Evie's story. It's not hard to tell from my super long overview that a lot happens over the course of the book. It's a very comprehensive look into Evie's life, and, while it could have been reigned in a bit, the length let us settle into Evie's life and really enjoy it.

Writing: 4 The beginning and the end of this book are not it's strong suits. I'd actually started the book a month earlier before setting it aside to read later after 3%. When I picked it up again from those few chapters in, I forgot why I was so turned off by the book and was able to get into it. My problem with the ending was the same shock. I turned the page and it was just over. It felt like there were chapters missing. I by no means need a pretty bow, but I appreciate there being something to wrap up the story, even if it is just an acknowledgment of a messy ending.