Somehow, I lucked out and managed to find myself in New York City on the night of David Arnold's tour stop! I'd wanted to see him as he's one of my favorite authors, but he wasn't coming to a city near me, so I wasn't sure it would happen.
Barnes and Noble Union Square was the first stop I made after driving in from the airport to collect my wrist bands for the evening's events. I picked up a finished copy of The Strange Fascinations of Noah Hypnotik to join the ARC I already have on the shelf, and I also grabbed a copy of Leah on The Offbeat as Becky was also there to promote her new book.
I came back at six to stake out my seats for the event and also bought They Both Die At The End by Adam Silvera since he was there to moderate the event. I've been meaning to read the book for so long (I have it on audio), but I'm hoping the print book will be more motivating.

The panel was so much fun. David, Arnold, and Becky are all great friends which simply brought the panel to another level. Having established chemistry allowed them to jump right into hilarious jokes and stories about one another avoiding the stiltedness that comes with most panels.

Adam had a great list of questions already listed for the authors to answer about their books and one another, and the packed audience also brought it with their questions!
While every moment was full of fun and thought, there were two that really stood out to me. The first was a question from a girl towards the back about writing and avoiding stereotypes which is something we all aim to do, though it can be difficult. 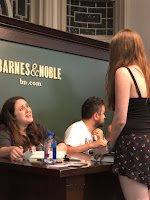 The question really highlighted the diversity on the panel. While all of Adam's books are own voices, David's are not. David said that he originally wasn't going to write Kids of Appetite because he was so scared of misrepresenting a disorder that he did not have, but, since the story wouldn't let him go, he dug into intensive research to ensure that he wasn't misrepresenting the community. Adam jumped in to say that sometimes a stereotype is a stereotype for a reason, and his characters have been called out for traits that he took from himself. At the end of the day, you just have to brush is off and understand that not everyone has your experiences, even as in Adam's situation, they're another gay, Puerto Rican, tall guy from the Bronx.
Along the lines of sharing a diversity of voices and experiences, Arnold talked about how important it was to think about empathy in life and in writing. He aims for his characters, and hopefully his readers, to expand their minds about other's situations over the course of the work. It's also something he tries to teach his son who calls it "being empathy" which is something that we should all strive to be.