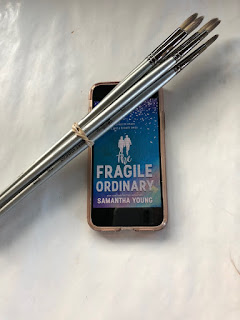 The Fragile Ordinary by Samantha Young (June 26)
Overview: Comet's life in a small suburb of Edinburgh, Portobello, has been mostly consumed by books. They keep her from being lonely and leave her informed about the world she's missing by skipping going to parties with her friends Vikki and Steph. That's until Tobias King, a new American boy, shows up on campus to turn Comet's life upside down. Finally finding someone who pays her notice, Comet starts to come into her own though she always battles the fear of becoming dependent on another person like her parents who all but abandoned her as their "unhappy accident." Comet is an inventive dresser, a poet, and a wonderful friend; she just needs the right people to continue building her toward her dreams. Overall: 4.5

Characters: 5 I loved Comet. She's probably in my top favorite characters of all time. I identified with Comet and her story on such a deep level. She's independent, smart, focused, and quiet with a loud exterior. It also makes me happy that there's another YA character who feels totally content with a pile of books and a quiet night.
I enjoyed getting to see the interactions among the different characters. Tobias is kind and compassionate, and actually intelligent, but he's dependent on those around him to dictate which version of himself he portrays. This means that he shows a whole range of different characters as he splits his time between questionable Stevie and Comet.
Then there's Comet's just as complex and sometimes flighty friends, Vikki and Steph. Though Vikki tries to stay somewhat constant, Young really lets themselves ebb and flow in an interesting way.
Her parental relationship is also a great asset to the story. Though they start as possibly cliche, absent YA parents, but Young lets them develop into so much more. Even if they don't become a super defining force in Comet's life, there's an exploration of the situation I haven't seen before. And Comet does have some important adult influences in her life including her neighbor and teacher which is great to see.

Plot: 5 I had a great time with the storyline and Comet's evolution. Even if I could guess the next twist or turn, I had so much fun getting and being there that it didn't matter so much to me. I loved how strongly Comet held to her goal, and how fiercely she fought with herself and others to defend her mission. She wants to go to UVA to study poetry. As Comet and I share the same goal reversed (I'd love to move to the UK to study writing), seeing her take steps toward her goal felt quite familiar.

Writing: 4.5 I have great admiration for Young's ability to boil down all of these amazing elements into something that really could be summed up into a few concise sentences. It's rare that I find a book that's both pleasing to the naked eye and under the microscope, and that really speaks to Young's ability as an author to hold all her her subplots together, letting nothing stray too far.

*I do have one little side note, and that's: a lot of YA characters want to be writers. Comet is one of the few who earns that wish. Her poetry that is shared at the start of every chapter is phenomenal.