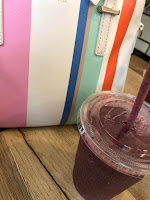 As someone who has recently connected the dots to realize maybe gluten isn't her friend, the idea of leaving my house and my kitchen, full of safe food, was terrifying, but, alas, being a hermit is no fun, and I had college tours to attend in both New York and Boston. As a devout planner, I decided to quell my anxiety with research and felt a bit better.
Armed with plenty of safe place to eat that not only offered gluten free but (mostly) healthy foods, I got on the plane. The food turned out to be one of my favorite parts of the trip. I wanted to take a minute to highlight the deliciousness of New York City, I just wanted to say that no one else in my family has to eat gluten free, so they had much higher standards for foods where they could have the real deal, and I managed to blow them away with some of my picks. Gluten free can be totally delicious, and if you have to eat this way, it is in no way culinary death sentence.


Wild
Right before I found out I was gluten intolerant, I fell in love with pizza after not being a fan almost my entire childhood. Since getting pizza takes a lot more thought and effort now than calling Dominos, I jumped at the chance to have some of the best gluten free pizza in NYC. I can attest, that is not an exaggeration. With crust that is perfectly crunchy without being a cracker and a good sauce to cheese ratio, it was just what I needed to recharge from a long flight!
Cafe Clover
I got to attend an awesome book event with Adam Silvera, David Arnold, and Becky Albertalli (which I wrote about here ). I didn't mention, though that the signing line wait was over an hour and a half which meant that my poor mom I dragged along with me and I were looking for dinner at ten at night. Cafe Clover gave me the clean meal I needed for a blood sugar boost. While not my favorite place I ate, they did provide the steamed broccoli I was craving and made some seriously awesome chickpea flour hushpuppies!
Cafe Clover was the place I realized how nice it was to go to a gluten free restaurant because I didn't have to think before putting something in my mouth.
Bluestone Lane 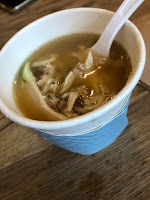 I honestly didn't realize how trendy this place was till I showed up well into brunch not ready for a wait. I guess the mention of Taylor Swift choosing it for avocado toast should have tipped me off... Anyway, as I was checking off all my cravings, they offered a delicious gluten free banana bread that made my heart sing. Though it was an indulgent breakfast, it made me happy.
Springbone
This is the hands down times a million winner of best food in New York City. I'd been wanting chicken soup for a long time, and it's a difficult thing to find in a gluten free form. That's why Chicken Zoodle Soup is my new favorite food. I even got my dad to admit this soup, composed of chicken broth, chicken, and zucchini noodles, was better than the real thing. The other food group I'm obsessed with is smoothies. Springbone also fulfilled that wish with a delicious berry banana blend. It was so good I had to go back the next day to have as much as I could before I left.

Links of Interest:
Made You Up: Review Here
A Flicker In The Clarity: Review Here
Be Empathy: Author Event Wrap Up: Article Here
Books In New York: List Here
Other Editorials:
Check Out The "Me" Page: Here