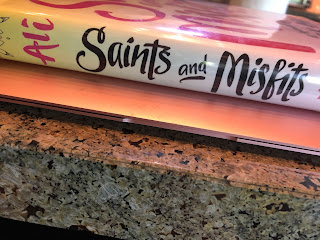 Saints and Misfits by S.K. Ali (325 pages)
Overview: Jana is at the top of her class and active in her Mosque despite having to deal with her parent's divorce and her brother moving back home from her college. She's managing to deal with everything by leaning on her friends for support until one day her friend Fizz's cousin who is held in high praises at the Mosque, tries to rape her. Luckily, Jana gets away from Forooq, but she's left stunned silent and living in fear. Jana must find a way to speak out before her angry feelings consume her life. Overall: 3.5

Characters: 4 I liked Jana and her friend Tats. They had a great, genuine relationship, and they used coming from different backgrounds to their advantage. Even when they fought, the reader gets a sense that they'll always care for each other. I also liked her brother Mohamed and his fiancee who Jana nicknames "Saint Sara." They help to enrich Jana's world.
Unfortunately, a few of the characters came off completely flat or simply there to serve one purpose or another. I felt like some of the characters weren't given enough genuine motivation for their actions.

Plot: 3.5 Even though the books is about average length, I felt it almost could have been shorter. It simply lacked the sense of urgency I need in a story to keep me engaged. I enjoyed the book while I was reading it, but I was never desperate to pick it up.
I did like the story though. Watching Jana try to cope with what happened to her was gut wrenching, and placed in the context of her spiritually involved life, it was interesting to see how her community informed her actions. I also love how inclusive the story was. The reader gets to see Jana interact with people of varying degrees of faith as well as nonMuslims, and that allows the reader to see how each interaction informs her shifting world view.

Writing: 4 While the voice never felt very immersive, I did get a sense of Jana through it. The story was interesting as Jana goes through many evolutions in her confidence. While some members of the large ensemble cast got forgotten, Jana rang true, keeping the story afloat.