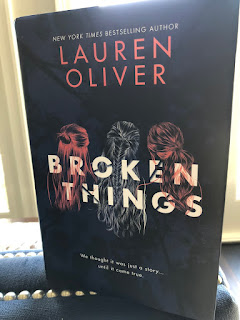 Broken Things by Lauren Oliver (408 pages)
Overview: Brynn, Mia, and Owen have been living in exile since they were twelve and thirteen years old for a crime they did not commit. They were not involved in the Summer's murder. They were framed by their fan fiction and a clueless police force that needed a scapegoat. Mia has been forced to homeschool through high school, unable to leave her house. But it hasn't been all bad. Two years ago her now best friend Abby moved to town and joined her schooling group. Owen has been at boarding school in Scotland where he started over after being acquitted, and Brynn has been artificially extending her time in rehab since her accidental almost overdose after Summer's death. That's where the story begins with Mia coming to get Brynn out of rehab so they can clear their names once and for all. Overall: 4

Characters: 4 I enjoyed the whole cast. Brynn was probably my favorite because she had the strongest identity of the group and also the most complex expressions of her emotions about Summer. I also thought that Owen was a great addition because, while he was the only one formally tried for the case, he ironically gained the most distance in the fall out, so he has a different prospective than Mia and Brynn even though he comes from the same place.
The only character I wasn't fully in love with was Mia. Even though she's a point of view character, I felt like the reader saw most of her growth through Brynn's prospective or other character's comments. Her less passionate connection to Summer gave the reader a clearer prospective in certain situations, though, which was helpful in conveying the fullest picture possible.

Plot: 4 I did not guess who the real murderer was till the girls did. The clues are very subtle. You piece it together with their guidance, but if you think you're going to figure it out first, you're missing the point of the book. It isn't a mystery really. It's closer to a thriller and the component of unraveling their relationships to Summer, who reminds me of Alison on Pretty Little Liars.
My only comment is that it might be slightly more plausible if the girls had been in seventh and eighth grades in the lead up to the murder instead of sixth and seventh. In my experience, sixth graders are still a bit under the radar of what Summer, Brynn, and Mia experience.

Writing: 5 Oliver has a nice style with her writing and excels in bringing sharp tongued, witty, strong girls to life. I thought that, overall, she did a great job handling both the multiple points of view in the book as well as the shifting timelines. I thought that Oliver achieved her mission to showcase the intensity and confusion that can come from toxic friendships and in making the reader understand why the two girls would stand behind a friend who was emotionally abusive and manipulative at times.
Just as a side note, Lauren is so kind and genuine. I had the chance to meet her on Monday (I've linked the post below), and she had so much writing/publishing advice to share as well as great stories.

Links of Interest:
A Very Large Expanse of Sea: Review Here
One of Us Is Lying: Review HereWhat If It's Us: Review HereTaylor Swift and the Reputation Tour: About Here
New Release Wednesday Reading Weekly Reviews and Recommendations