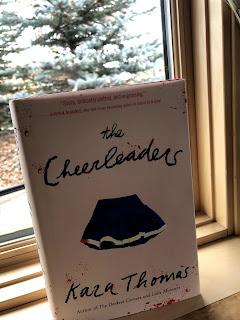 The Cheerleaders by Kara Thomas (372 pages)
Overview: Five years ago, five cheerleaders on the same high school squad died in three separate incidents, but how separate were they? That's what Monica wants to know. Her sister, Jen, was the last teen to die in the tragedy when she died by suicide, but Monica isn't convinced it was simply survivors guilt at play. She's also not convinced that Jack Canning was truly at fault for two girls murders or that the car accident that took the final two girls was really an accident. With an unlikely friend by her side, Monica sets out to dig up the truth about what really happened to those five girls even if it jeopardizes her own life. Overall: 4.5

Characters: 5 I loved Monica's voice. Even though it's told in third person, her character really shined through. Despite making some poor choices and putting herself in dangerous situations, she does strive to do what she thinks will bring truth or justice. Ginny, a girl she connects with through dance team, makes a perfect counter part. She's not nearly as outwardly bold as Monica, but her levelheaded, observant nature balances Monicas loud assertiveness that sometimes leads her to overlook things.
My favorite character relationship was between Monica and her younger half brother Petey. Thomas did an impeccable job portraying little brothers and how that sibling dynamic works. Really, her whole family is done really well from her grieving and in some ways absent mom to her stepfather on the police force that she can't decide whether to trust.
The extra characters that come into play throw twists and turns in the road. Even people who seem to be disconnected from the central plot line and drawn back into the narrative in major ways, and everyone gets their arc one way or another.

Plot: 4 On the whole, the plot was very satisfying. I had a hard time putting the book done. The final chapter is dynamite, and the way that everything clicks into place at the end is like the perfect last notes to a symphony. While Jen's chapter's didn't take away from the book, I don't know if they were entirely necessary. They gave a nice extra layer, but I would have liked some greater mark to them to differentiate her chapters more from Monica's in style. I also wish that the other cheerleaders could have been given fuller personalities through Jen's POV, because, in my mind, they were all just kind of one, big, cheerleader glob.

Writing: 5 I appreciated Thomas's style and unflinching look into Monica's life. The emotions behind her actions were raw and honest, and she did a great job giving a full picture of the situation. Thomas made me feel like I'm in the book in Monica's head, living her life. It makes for a truly infectious read.