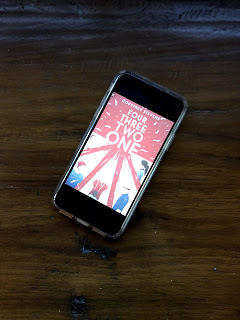 Four Three Two One by Courtney Stevens (November 13)
Overview: There were four survivors of bus 21 after the charter bus was bombed a year ago. There was a young couple from a commune in Kentucky, Golden Jennings and Chandler Clayton. There was a soccer star left wheelchair bound, Rudy. Finally, Caroline, the last survivor was the bomber's girlfriend, and she's left to shoulder his guilt and her own. When the bus gets reassembled as part of an art installation/memorial by one of the paramedics who helped saved Golden, she feels determined to get all of the survivors back together, even if that means hurting some of her own relationships. Overall: 5

Characters: 5 All of these characters are so deep and individual. They've also had the trauma touch their lives in different ways. Golden has always been stuck between leaving the Hive and going to Emerson or staying and getting married to a boy she's loved almost her whole life. She knows there's no combining the two after the bus incident and the fights they were having that day. Golden just wants to be able to reconcile her feelings, but no one on the Hive wants to let her.
Chandler coiled himself deeper after the bus. He pretends it never happens. In his woodworking shop and with his sketches, he hurts in silence while his girlfriend begs him to speak, and their opposing wants wear on him.
Not to mention Rudy. Rudy finally accepts Golden's friend request on Facebook. They'd only met once before the bombing, but there's chemistry you could pull out of the air. But she has a boyfriend. Rudy respects that and stays upbeat, but the road trip helps him resolve feelings he's kept close to his chest as well.
Finally, Caroline. She's been bullied to no end since the bus explosion. She had to leave college it was so intense. Wrapped in a spiral of self hate and self harm, she can't get past her former abusive relationship ir how it ended on the bus that day, but, as the trip to New York goes on, if she chances opening her heart to this crew, she might just make it to find happiness again.

Plot: 5 This book dissolves into a sort of road trip novel. It starts with Golden and her doubles partner, Becky, setting off for New York, and they slowly make their way through the states to gather the other survivors. Car troubles, painful realizations, and healing ensues as they travel, slowly, to New York.

Writing: 5 I've never read a book that's made me reflect on it so much after. Not necessarily the events of the bus incident, but how each survivor dealt with the pain. They each treated it differently, and they each had a different idea of what moving forward was for them. Both applying this to any other horrible experience and thinking about it in the context of the numerous violent attacks that seem to happen each week, it's both heart wrenching and unsettling to experience, through Golden and Caroline, how deeply internalized wounds become and how a tragedy is never escaped without survivors guilt.