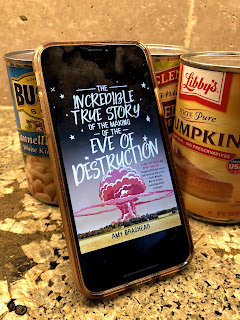 The Incredible True Story of the Making of the Eve of Destruction by Amy Brashear (November 13)
Overview: Hollywood is coming to Griffin Flats, Arkansas. And they're going to blow it up. Well, for the movie. Laura Ratliff wins a radio contest that guarantees she'll get to be a part of it. She decides to take her stepbrother Terrance as her +1, and she's actually excited to see a real Hollywood set, even if the theme of the movie centers around her worst fear, a real nuclear attack. Even though everything seems fine at first, when the movie bombs go off, no one can be sure it was just a prop. Overall: 3

Characters: 4 I loved Laura. She's an awesome main character. In the opening scene, she pulls the string to make the sprinklers run in the science lab so that she wouldn't have to do all of her lab partners work. I knew from that moment that we were kindred spirits. And I did love Laura's voice throughout as well as her stepbrother and best friend. Some of the more periphery characters and the ones from Hollywood were a bit one dimensional, but they all had a strong character core.

Plot: 2 This is where the wheels fell off. I really enjoyed the book until the last 20%. I felt like I missed something, so I went back and reread it, but the actions go from clear, though sometimes a bit jumbled, to "I have no clue what's going on." This is when they hit the point when they're unsure if the bomb was real or fake. I think the major problem is that the descriptions really end at this point. There are short sentences that give little information, and none of the great insight and explanation that Laura had given throughout the rest of the book. It was really disappointing.

Writing: 3 Laura's voice was great. I especially loved the opening few scenes and how well Brashear immersed me into 1984, a point in time I never experienced. The footnotes to explain the '80s lingo took me from vaguely aware of the references to fully immersed in the culture, and I felt like I really got the know Griffin Flats. Unfortunately, as the book progressed, this faded out until the ending became almost unreadably spare. Also, while I love the inclusion of fliers and pamphlets and stuff in books, the amount of technical detail and length in these had me skimming and skipping sections of tedious legal jargon sounding pages.