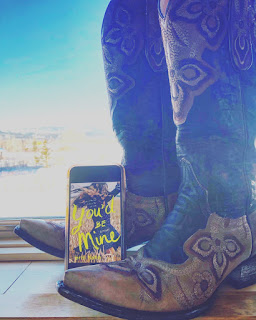 You'd Be Mine by Erin Hahn (April 2) To Purchase From Your Local Bookstore (Affiliate Link)
Overview: Clay Coolidge is the new hotshot in country music, but his tour hinges on him signing his opening act, Annie Mathers. While they doubt Clay can keep his cool on the summer tour highlife, they know that Annie has a promising career ahead of her because she's the product of two of countries hottest, and most infamous, country superstars. Even though the door starts as a business deal, it winds up being a journey of self discovery and a love story of its own. Overall: 5

Characters: 5 Annie and Clay are more than just celebrities or musicians. They're real people, and, while you get a glimpse at their larger than life sides, Hahn never lets you get swept up in the glitz and the glamor. They are two brand new adults in a brand new world, still mourning losses from their old one.
Annie has been trying to outrun her parents, and their famous double suicide, since she found their bodies at thirteen. She's inherited her parent's talents, and she loves to perform, but she's paralyzed at the thought of show business destroying her like it did her parents. She also wants to make it clear that she's not Cora and Robbie. She never will be. But taking the opening gig on the hottest tour of the summer brings her almost too close for comfort. Because she's had her grandparents and her cousin to ground her and give her a stable life, she's much more rooted, sensible, and better prepared than Clay. Her biggest boundary is her fear of history.
Clay hasn't had a parental figure in his life for too long. His father left, his mother died of cancer, and his brother died at nineteen in the line of duty. Then Clay's career took off, and he drowned his pain in alcohol instead of confronting it. Though Fitz, his brother's best friend and Clay's bandmate, does his best to keep him grounded, at only twenty, it's hard for him to know what to do for Clay.
The characters really take centerstage in this story, and I absolutely loved that.

Plot: 5 The plot was more than I was ever expecting. It's sold as a cute romance between two young musicians on tour, but, more accurately, it's about two people trying to figure themselves out and then figure out if they're good for each other. Even though you root for Annie and Clay, Hahn does an amazing job grounding the book and reminding the reader how toxic Clay can be when he's at his worst, especially for someone like Annie who suffered from her parent's drug and alcohol. Annie wants to help Clay, but she doesn't stay with him, and she doesn't "save him." I love how Erin made Clay in charge of realizing that his sobriety is important, and she didn't have Annie drag herself through the mud over him. There's plenty of drama, but the story is told in a healthy, realistic way, which can't be said for some novels on the YA market.

Writing: 5 I love that Hahn chose to write the story with two eighteen/nineteen year old protagonists.  While it's not set in college, they're out of high school and they're having to wonder about what the rest of their lives will be while they're setting their plans in motion. (As a side note, Wednesday Books seems to be putting out a ton of these Older YA books which is super cool, and I hope it continues.) Annie and Clay have very distinct voices, and they jump off the page as real, messy people. Even if you're not a country fan, this sweet story will steal your heart.

Make sure you swing by on Friday to catch my interview with Erin where we talk about the book, her writing journey, and what's next for her!