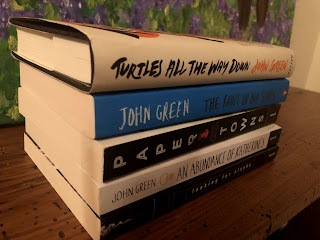 As a little closing post, I want to better define the way that I use adult. I mean the people who have books for them again. Right now, there's a major hole in the books market when it comes to New Adults and teens that are suddenly also adults. YA is the closest thing they have to books that honor their experiences, and they're still close enough to their teen years to have close memories to what that's like. I plan to write a post on this soon too!
Also, I talk a lot about John Green in this post not because I'm super promoting John Green but because it's an easy way to make a point because the notoriety of his books have brought a lot of different people to make judgements on his characters and his teens. There are tons of other books by lesser known or newer authors that resonated with me in the same way that I want to boost, so I'll be putting out a list soon to accompany this post!