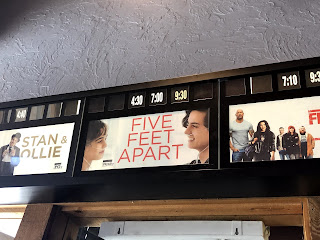 I'm not really a movie (or even a TV) person, so I'm not normally sitting in the first showing of a film, but Five Feet Apart got me out of my house and into a theater chair. By the time I saw the movie, I'd read the book the week before, and it was pretty good, but nothing I'd put on any must read list (I'll link to my full review here and below). I'd recommend that if you don't know much about Five Feet Apart, you read the review first so that you know a bit about the movie. This'll make more sense. But I did like the premise, and, once I found out that the book was reverse engineered from the movie, I got really excited to go see it.
Also, Cole Sprouse. As a major Disney Channel turn Riverdale turn, I guess, this fan- I will watch anything he's in.
So, as for the movie itself, I had a rough idea of how everything would go down, but I was ready to see it in a new light. And I love the story so much more for it. If you did read the book in advance, you'll know the story beats, and you'll recognize a lot of the lines. With the movie as a source material, it means that the two mediums are a lot more faithful to one another, which is cool. You'll also have a little context for why certain things happen earlier than they're revealed in the movie like why Stella likes going to the NICU. The final added bit is an epilogue that isn't included in the movie (and I sat through most of the credits, so I'm pretty sure it's not there), and the students .
But the book doesn't really do the movie justice. The casting for the movie is perfect, and the acting hits all the right notes. The timing is perfect on all of the jokes, and the poignant moments translate perfectly. Haley and Cole do an amazing job telling the story and showing the emotions that Stella and Will go through. I also thought the actress who played Barb, Kimberly Herbert Gregory, and the actor who played Poe, Moises Arias (also a Disney alum), did amazing jobs as well. The actors make this movie.
If you're a writer, I would recommend you watch this movie. It's an amazing example of showing- as in the age old rule of showing not telling. While in movies, showing is kind of the direct route, they do an amazing job of relaying their motions through actions. I found watching them rage and cry and fret and everything else far more compelling than what I'd been told they were feeling on the page.
I'm not a cryer but watching their grief and frustration that's so genuine made me start crying with them. I thought I might make it through after only getting teary, but at the end, there were full on tears streaming down my cheeks, and almost everyone else in the theater was audibly sobbing which was an interesting experience.
I've never had such a communal theater viewing experience before. At Love Simon, we all laughed together, but this was on a different level. Even though there weren't a ton of us, there were people gasping, whispering warnings and variations of "Oh nos" and collectively holding a breath!
At the end, I was glad that I went out to see it. The only part I didn't love was the soundtrack. Sometimes it was perfect, but sometimes it took me out of the film and away from what was happening on screen.
Overall, I'd encourage everyone to go out and see the movie! I'm definitely rewatching when it hits one of the streaming services (or at least comes out to buy on iTunes). Whether you want to read the book or not, I don't think it matters. I might even suggest that you read the book afterward if you don't want want to leave the Five Feet Apart world. I think that it's great that the movie is bringing more awareness to Cystic Fibrosis as well. I wasn't super aware of the disease before this, and I'm glad that I've started to learn more. I would encourage everyone to visit the Cystic Fibrosis Foundation to find out more and read reviews by people who actually have CF. Since the movie hasn't been out long, I haven't come across a movie review yet, but I can't wait to see those individual's view of it. Again, I can only judge this as a movie and with my own understanding and prospective, so I think it's important that the community it represents gets the loudest voice on if the movie was actually well executed.
And for those who think this is kind of a Fault in Our Stars ripoff (I was guilty of this), it's not. While the movies have a lot of similarities, and, if you like one, I'd recommend you watch the other, they're very much their own things.

P.S. They were running previews for The Sun Is Also a Star movie (it comes out in May), and it looks like it's going to be another amazing addition to the YA movie-verse!


Related Links...
Five Feet Apart Book Review:
The Fault In Our Stars Book vs. Movie: Here
To Purchase the Book

The purchase link is an affiliate link which means I may receive a small commission at no charge to you.
Editorials Movie Spotlight New Releases The Book and The Movie