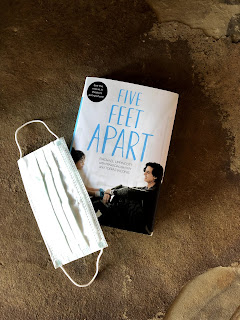 Five Feet Apart by Rachel Lippincott with Nikki Daughtry and Tobias Iaconis (281 pages) Buy From Your Local Bookstore
Overview: Will, Stella, and Poe all battle Cystic Fibrosis. They can't get within six feet of each other because they may accidentally harm or contaminate one another- especially Will. Since his bacterial infection contraction that's taken him off the transplant list is so easily spread, it'd be smart for the others with CF to stay far away from them. But Stella can't help the feelings that develop for Will. Overall: 4

Characters: 4 Stella struggles between control and wanting to be reckless which makes Will like a magnet to her. She feels like she has to be responsible and stay alive because of her carefree older sister's cliff jumping death. Focusing on her hospital treatments has distracted her from the frustration she feels with her disease and the limitations it imposes. This is only exacerbated by her falling for Will but having to stay away from him.
While Stella embraces Will's "you only live once attitude", Will becomes more cautious through falling for Stella. Instead of being a rebel and fighting against his treatment, he wants to do what's best for his body and what's best for Stella. It's interesting to see them switch to each other's extremes before coming back to a happy medium in the end.
Poe is another important character. He's Stella's best friend of a decade and one of the few constants in Stella's life. She clings to someone who has to deal with being terminally ill and the impermanence of life that she does. While he understands, they still face their own challenges and a permanent physical divide between them.

Plot: 4 The plot is a little predictable, but it's cute. I enjoyed learning about CF and falling for Stella and Will. It's a cute romance that doesn't go too deep below the surface. It almost felt a little brief to me, though. I think there could have been more scenes and more of a gravity applied to the whole thing so that the emotions would sink a little deeper.

Writing: 4 Honestly, I picked up this book because I was planning on watching the movie when it comes out because Cole Sprouse is in it. I figured I'd read it first because normally the book leads to the movie. I hadn't picked up the book before, despite the buzz, because my impression is that this book was built in reverse.
For retrofitting a novel to a movie, I think that Lippincott did a good job with what she had. I haven't seen the movie yet (I'll be posting a movie review/update on Tuesday), but I wish that the book had taken the opportunity the deepen the internal emotion and monologue of the characters in a way that movies can't. Instead, this left me feeling a bit like I got a transcription of the visual elements of the movie and the dialogue. I totally get if Lippincott didn't feel like she could expand on the movie though I still don't totally get why this wasn't just a teen movie?
Also, it was a little weird to read the character description and then look at the cover and realize she really probably was describing the actors that had already signed on.
I'll be interested to see if the book and movie are more faithful to each other than most adaptions because the movie (with all the constraints movies bring) was the source material.

Since this book isn't own voices and I'm not an own voices reviewer, I would encourage you to also go read reviews by those with Cystic Fibrosis as well to better understand how successful the portrayal was. One review by Gunner Esianson who is own voices really nails down the books issues with depth. You can read it here.


Purchase Here
If You Liked This Book...
The Fault In Our Stars: Review Here

Links of Interest:
Into YA with Lillie Vale: Here
Small Town Hearts: Review Here
Long Way Down: Review Here
Waiting For Fitz: Review Here
All Purchase links are affiliate links. I may get a small commission at no charge to you.
Reading Spotlight New Releases Weekly Reviews and Recommendations