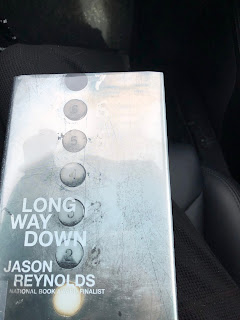 Long Way Down by Jason Reynolds (306 pages) Buy At Your Local Bookstore*
Overview: It's just one elevator ride. Just one elevator ride to the rest of Will's life. Eight floors takes so long when you're headed to kill someone. Even in revenge. Even for justice. Even when your brother was just murdered. It's even longer when every stop brings someone who's left your life back in. There's so much to learn before Will hits the lobby. Overall: 4

Characters: 4 Because of the atmosphere and the point of the story, we don't get super into the characters. They each represent a stop on a horrible cycle. It starts with Buck, Will's older brother, Shawn's, older brother figure. When Buck got killed, Shawn had to avenge his death, which got him killed. He also meets his Uncle Mark, an aspiring filmmaker who's death lead to Will's father's death because of the Rules. Each character doesn't exist to explore themselves or have their own motives- they're there to make Will realize what is about to happen. How he's about to contribute to the circle that has hurt him and his family so much.

Plot: 4 If you love plot, I'm not sure how you'll feel about this book, but I'm one that will take character or concept over plot, so I ate it up. Because it's a single elevator ride, think about the book like flash fiction that happens to be three hundred pages. I love the captured moment aspect.

Writing: 4 This is one of my favorite verse novels I've read. I love how the different poems explore and delve into format to use it as an additional tool. Each page was carefully constructed to have both a literary and visual aspect. The unfocusedness that you feel throughout the book is a wonderful sort of disorienting. It makes you feel like you're looking through a window at someone else's life without putting barriers between you are the events.
You can feel Will's adrenalin haze while you read. The concept is well executed, and each of his hallucinations are so impactful. Reynolds contributes another narrative to the call for gun reform and the importance of regulating such dangerous weapons. Rash ideas, misinformation, and the ease of pulling the trigger opens the door to a never ending circle of pain.

*The purchase links are affiliate links so I may earn a small commission at no extra charge to you.