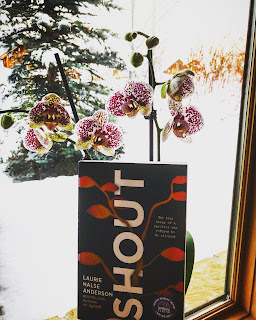 Thoughts: The memoir is broken into three parts. The first and last focus heavily on her family and family life. The start is her young childhood, her parents background- laying the groundwork. The end circles back to these same characters and their struggles, now at the end of life instead of starting to make their way. Both of these sections were filled with very vivid images.
The second part is my favorite, though. While I haven't read any of her books, this section completely captivated me. She writes about what sparked the idea for some of her books, most notably Speak. She talks about how everyone told her the book would never work. Even though I never read the book, I know that Speak paved the way for what YA is now. And her story is a very compelling one.
But it gets even better as she drives into her experiences talking to students in schools about the book. The stories she tells about girls confiding in her at these meetings are both heart wrenching and heart warming because Halse Anderson, though her books and advocacy, had become a sort of safe space for them to voice their truths. She included a few of the most vivid memories of these spare moment encounters. This segues into a rallying cry for all of us to stand up together, for each other and for out own scars.
There were two poems that particularly moved me and caught my interest. The first was a discussion of the first time she was in a court room, for her job at the time covering the court, watching a rape trial. She talks about the rapist's pure indifference as the claims of kidnapping and rape are read, as the woman falls to pieces on the stand, and as the prosecution ripped her to shreds for going out, for taking a ride home from the man, for going inside his house, only for a moment, so he could allegedly let his new puppy out. The man barely got a punishment, and, she makes a point to be bluntly clear with what her sentence was, a life sentence, as any survivor knows. She tackles the weight of PTSD in her own experience and those of others- how it ruins victims lives.
And this poem is especially striking in the context of the poem that follows a while later. She discusses the school visits, and how she started discussing consent- how confused so many boys were. She talks about how they're fed a steady diet, at home and through culture, about how women's bodies are something to be conquered, not people with rights and feelings. Halse Anderson marveled at how new realization was brought to so many boys by those conversations. And it makes you think back to the blank, unfeeling face of the rapist in the courtroom who feels no guilt at all.

I don't tend to read nonfiction books or memoirs very often. I also don't read poetry collections or verse type novels super often, but I don't think I want to read this type of book not in a group of poems again. The poetry format strips out the unnecessary words, rambling and boring stories to get right to the point. It also evokes a moving picture of image stills that is vivid and makes reading a breeze. I finished the book in a day.

If You Like This Book...
To Purchase: Here
Girl Made of Stars: Review Here
The Way I Used To Be: Review Here

Links of Interest:
What's Coming Up In March: Here
People Like Us: Review Here
Into YA with Nikki Barthelmess: Here
The Quiet You Carry: Review Here

*All buy links are affiliate links which means I get a small commission at no extra cost to you.
This is an ARC I won via a giveaway. All opinions are my own.
New Release Wednesday Reading Spotlight New Releases