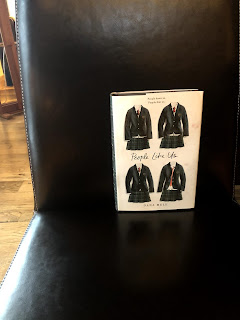 People Like Us by Dana Mele (375 pages)
Overview: There's a girl dead in the lake. Kay and her friends are the ones to discover her body after a school Halloween dance, and they're immediately at the top of the detective's suspect list. While no one else has anything to fear, Kay has a long history with police questioning and suspicion, and she's terrified of finding herself in the same position again. Then she gets an email with a link to a revenge website that claims to have been made by Jessica, the girl that they didn't even know till they found her body. But as the website intensifies and orders Kay to betray her friends one by one to keep her secrets under wraps, Kay begins to realize there's something more sinister at play. Overall: 4

Characters: 4 Kay is an interesting character. Guilt plagues her and informs nearly every action in her life, but once she gets to boarding school, Bates, she transforms into a quintessential mean girl with a whole posse.
They don't really get much into Kay's other friends, but, besides the murder, the main story centers on the love triangle (or possibly some other shape) between Kay, her best friend Brie, and her on again off again boyfriend Spencer. Brie is dating another girl, and her story with Kay is one of plenty of missed connections. I liked both these characters, and the approach to their relationships is very interesting, but Mele never digs into any of the other character's motivations. They're very vivid through Kay's eyes, but they have no incentives or motives of their own.

Plot: 4 There were plenty of twists and turns to keep you going through the book. The boarding school, the revenge website, Kay's ruining personal life... there's lots to choose from. My only comment is that there are a lot of scenes that slowed the pacing down that didn't really contribute to the plot or gave minor details that could have been incorporated in other ways. Overall, though, I was pleased with how all the little details crescendoed up to the big reveal as any good thriller should.

Writing: 4 I LOVED Mele's style. It was immersive and kept me drawn into the world. It made the pages turn quickly, and it planted the seeds of the murder investigations very well. Although I'm not in love with the ending, the story was fun and engaging for the most part.


*Possibly Spoilery Comments, but I have to say it*
Proceed with caution...
I'm not naming who the killer turned out to be, but if you're in the middle of it, you might guess based on what I'm going to say, so, you've been warned. Anyway, I was in love with this book before the last twentyish pages. Then it's revealed that the killer was the awkward girl that Kay and her friends bullied, and she killed the girl as collateral to her greater plan to punish Kay by framing her for it. Clearly, and it is said that she was a pathological liar, but there's something deeper there when it comes to mental illness from the way she described how and why she did it. Instead of focusing on how much of a tragedy it was that the girl's mental illness or personality disorder went undiagnosed and untreated, it's mostly chalked up to how sad it was that bullying lead this girl to snap, and it just came off as victim blaming to me, and I didn't like the jump between she was hurt and she had to get revenge that was a magnitude uncountably greater than what was done to her. While it's horrible how Kay treated her, it wasn't Kay or any of those girl's fault that the girl did what she did because she did not have a normal, sane reaction in anything during or after the crime. I feel like the way the author treated it did no service to portraying how harmful bullying could be or how victims of bullying respond.


Links of Interest:
Into YA with Nikki Barthelmess: Here
The Quiet You Carry: Review Here
On The Come Up: Review Here
You Asked For Perfect: Review Here
New Release Wednesday Reading Weekly Reviews and Recommendations