You Asked For Perfect 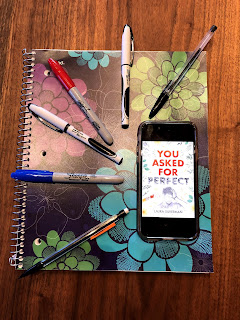 You Asked for Perfect by Laura Silverman (March 5)
Overview: Ariel has to be perfect. His whole identity rests on him getting the best grades, being first chair, being valedictorian, and, the culmination of all of his hard work... getting into Harvard. But the second chair violinist with nearly the same GPA also wants a spot in that freshman class, so Ariel has to work even harder than anyone could imagine to guarantee that it's his. But only a few weeks into senior year, Ariel starts to fall apart, and he's left to wonder if his well being or his pride is more important. Overall: 4.5

Characters: 5 There will be a lot of people who read this book and blame Ariel for being absent from his friendships, pulling away from his family, and sacrificing his physical well being for a goal that isn't even assured to him. All his effort and missed life could be for nothing. But those who say that don't understand how broken the education system is, particularly in America. They clearly haven't set foot in any kind of school lately. Because Ariel isn't the exception, as much as one would like to think; he's the rule. That's why this book will resonate with countless teen readers. Ariel is only living up to the basic expectations, and he's running in fear from the far too encouraged notion that if you don't get into a "good college" or an Ivy, your life might as well be over. Like the rest of us, Ariel's logical brain knows this isn't true, but the constant culture saturation of the message makes it impossible to escape. Even his fifth grade sister, Rachel, has physical anxiety manifestations from the overwork and pressure of school.
Aside from that, Ariel has a supportive family with a strong religious backbone. He finds a great community within his synagog, and his Rabbi proves to be very supportive when he turns to her for help. His friends do a good job of demonstrating how the pressure of high school gets reflected in many ways across many people. Sook turns her hyper focus into trying to launch her band before being drug against her will into college, and Amir actually has to convince his parents that he wants to be a doctor, not a photographer, even though he struggles with his AP chemistry and biology courses.

Plot: 5 Amir sums it up best, school isn't about learning. It's about cramming as much information as possible into a minuscule amount of time. Students aren't learning, they're not given time to develop complex thought, and our testing, SAT driven society is running itself and its youngest members into the ground. Ariel is a victim of this, and we see the wheels slowly pop off the cart.
The sad thing, though, is that, as seen in Rachel, the stress that starts incredibly young is never offered a chance to release. Finding balance or even something that should resemble a normal life means lowering your chances at an elite university. You're struck with the notion that you're failing yourself. And, while the latter isn't necessarily true, taking a reasonable course load makes your transcript less bursting than those teens still stuck in the toxic cycle, and those that break their back for it are the ones that get glorified at the end of the day even if they're crumbling under the unaddressed, staggering mental health injuries that the school system delivers.
Silverman asks us the question that so many want us to ignore. Do you really need the best? Is the best all its cracked up to be, or is it a fabrication of our society? Is clawing to the top worth it if you're too tired, broken, and burnt out to enjoy it? At what point do we step off the trail and decide our view is pretty enough to feel satisfied?

Writing: 5 I'm not sure how Silverman has managed to so accurately capture all of the sides of a teen's reality today. The depiction of school is so accurate to this current moment, and the emotions are so fresh and raw. While school permeates every aspect of this book, just as it does Ariel's life, she also provides beautiful descriptions of family, religion, and community that make this book so lovely. I think Silverman has crafted a mirror for the kids of today and a reality check to the adults who've made them the way they are.