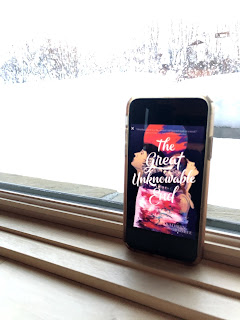 The Great Unknowable End by Kathryn Ormsbee (February 19)
Overview: Stella is stuck being a mother to her younger sister while her father works long hours and nights, her older brother left them for a cult, and her mother died when she was nine. Gilliard lives in this cult, better know as the Red Suns of a tiny Kansas town. He doesn't think of it like a cult, though, because he's never had a desire to leave. Until he loses the spot of resident artist and the next ten years of his life are predetermined in a direction Gilliard never wanted it going. Stella and Gilliard aren't pleased with where they landed in life, but will either do anything about it? Overall: 4

Characters: 4 Gilliard and Stella are both interesting, thoughtful people. Gilliard definitely has the greatest awakening of sorts as he finally questions his upbringing, much later than most of the commune kids. He shrugs off childhood ignorance and realizes that maybe he should form some of his own opinions about the "outside." It's a lot of fun to watch him "grow up" in a few short weeks as he gets to know Stella and the world around the commune. He has millions of new experiences, and he's forced to reevaluate everything he held to be true.
Another thing that I loved about Gilliard is that he has Tourettes Syndrome. I think it's super cool that Ormsbee decided to include this as part of his character; it fits seamlessly, and it brings awareness and understanding to probably the least understood and most stigmatized mental health issue there is.
Stella is also great. She's much more relatable because her realizations are smaller. She already has all the facts, she just has to admit them to herself- which is as hard as Gilliard's journey. Going to college and being a physicist or working at NASA would mean giving up her two jobs and primary caregiving role in her family. When her town goes haywire, it gives her permission to express herself as honestly as possible, even if she believes it's only for the next week before the world ends.
Another help in pushing Stella forward is her father's new girlfriend, Gayle, the first she and her sister have met in the eight years since her mom died. Gayle is a powerful woman who holds a high ranking job at the nuclear plant that Stella's dad is a janitor at, and, beyond inspiring Stella, she recognizes what the rest of her loving, albeit blind to her needs, family has missed. The family dynamics are another massively rewarding part of the book.

Plot: 4 So I guess I didn't read the whole summary before picking this up, or, at least, I forgot about the more sci-fi elements interwoven in the contemporary which includes a hologrammed countdown clock to who knows what, rain that's red, and total darkness, only over their tiny town. It's more akin to the realm of magical realism in how it gets integrated throughout the story, and, while I don't tend to like that stuff, the story's core always stayed at the forefront. Like Ormsbee's other book, Tash Hearts Tolstoy, there's plenty of plot, but it's the small life moments and realizations that take up most of the page, even when it seems like the world is physically ending.

Writing: 4 I was blown away by how different Ormsbee's writing here is from Tash, which I recently finished. Instead of precise, articulate sentences, these are more smushed together but also more flowing. I guess it shows a real versatility of voice from project to project.
Even though the book is set in 1977, I didn't get a huge impression of the time from these books. The references are on point, but the feel of the era isn't steeped into the core of the book. It didn't really bug me as the characters were the main point of the story, and I wasn't reading it for its historical significance, but I thought it was worth noting.
Aside from that, I thought this was a super interesting read. I love how Ormsbee took bits and pieces from lots of different cults (that you'll recognize if you're into true crime) and blended them into their own. Also, the whole dynamic of the cult "the inside" and the townspeople "the outside" looking no further than to blame each other for the catastrophic and unexplainable weather events instead of looking for a real solution was timely and an interesting allegory, whether it was intentional or not.


Other Books By This Author...
Tash Hearts Tolstoy: Review Here

If You Like This Book:
Four Three Two One: Review Here
The Making of the Eve of Destruction: Review Here