Into YA with Lillian Clark 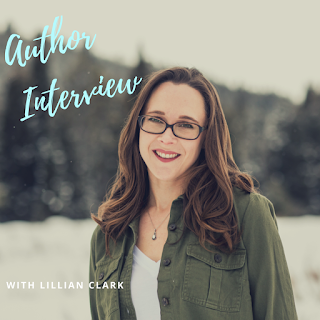 Today, Lillian Clark, author of Immoral Code, is here to chat about writing heist stories, multiple POVs, and what's coming next. She has plenty of tips and lots of fun behind the scenes information about the making of her debut book. If you aren't familiar with Immoral Code, my review and summary of the book is linked below.

1. Your book is a heist story, so you had to plot the crime along with your characters. Does that mean you did lots of outlining or did you just figure it out as you went?
Yes! So much outlining. Especially since I was writing in five POVs. I needed to plan out the whole book, including deciding who should say what, when. It was a lot of work, but it was so helpful once I started drafting and editing. By that point, I had a fairly solid idea of how the book’s structure was going to work, which made the drafting go smoother (if not faster, haha).

2. Many of you characters like Bells and Nari have very specialized interests like physics/astronomy and coding; did you have to do lots of research to fill in their factual commentary, or did you have prior knowledge in these areas?Another yes! For Nari especially. I don’t know much at all about coding, but almost everything interests me and I love learning, so I dove right in to the research. I read a fabulous book by Gabriella Coleman called Hacker, Hoaxer, Whistleblower, Spy as my jumping-off point, then researched each specific reference as I came to it in the book. With Bellamy, I love science. I haven’t focused on it like her, but I find it all endlessly fascinating. So writing her many scientific references was a matter of plucking tidbits of knowledge from my head when they fit the narrative, then doing copious research to make sure I knew what I was talking about. (Also, copyeditors are amazing. A special shout-out to mine and their fabulous understanding of these voices and all the help with these references!)

3. You balance five points of view in this book. How did you make their voices distinct? Do you have any tips for writers who want to share multiple prospectives? I absolutely have tips! The first is to really think about your character, about how they think and why. What do they like? What don’t they like? How do they feel about big issues and seemingly innocuous things? Knowing your character, beyond what’s on the page, is (I think) so important to voice. Next, think about syntax and structure. How can you reflect who your character is in the way they think and speak? Consider varying sentence length, punctuation, flow. And make sure to be consistent. Pick a set of rules for each voice and stick to them. Lastly, edit each voice, as a whole, on their own. This was the turning point for me with Immoral Code.

4. This is your debut book. Is there any advice you have about querying? How about for future debut authors? Always. Do your homework. That’s my go-to advice. Do it first with your own work. Make sure the writing you plan to query is the absolute best you can make it at the time you start to query. Don’t sell yourself short! Then, research. Research how to write a query, then research agents extensively. There are loads of great resources online (Query Tracker is a fantastic one).For future debuts (and this goes for querying authors too!) I think it comes down two things:1. Someone will hate your book, AND THAT’S OKAY. I know how that sounds! It’s so harsh! But art is subjective. Someone loves what you don’t and vice versa. And I’ve found it’s really important to accept (or at least try to accept) that some people won’t like my book, but also that that’s not a reflection on me as a person or a writer. Same goes with rejection when you’re querying and on sub. You will be rejected. As a writer, it’s inevitable. But being rejected is not the same as failing. Believe in yourself and keep working.2. Keep working! Ha, sorry. But, really, that’s it. Keep writing. While you’re querying, work on something new. While you’re on sub, work on something new. While you’re waiting for edit letters, sleep, but also work on something new! Just keep writing. That’s the most important part.5. I know that you’re focused on promoting your debut and getting that launched, but do you have any more projects that we can look out for in the coming year or so? Yes! Right now I’m working on my second novel, HALF LIFE, which will come out from Knopf BFYR sometime in the summer of 2020. It’s another standalone YA, this time contemporary meets near-future sci-fi. I can’t say much about it, but I am SO EXCITED about where it’s going, and like with Immoral Code, the research is a blast.

You can find Lillian on Instagram (@lillianclarkauthor) and Twitter (@lillianjclark), and remember to place your preorder of Immoral Code out February 19th!

If You Like This Book...
Tash Hearts Tolstoy: Review Here

Links of Interest:
What's Coming Up In February: Here
A Danger To Herself and Others: Review Here
This Is Not A Test: Review Here
Dead Queen's Club: Review Here