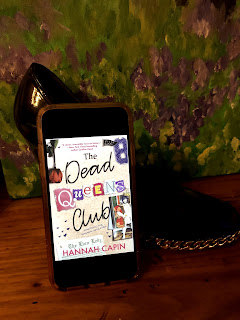 The Dead Queen's Club by Hannah Capin (January 29)
Overview: For fans of European history, specifically Henry VIII and his many wives, this is a treat. Modernized and set in high school, this version is the tale of all of Henry's living ex-girlfriends banding together to find the real reason behind the death of two of his former girlfriends, Anna Boleyn and Katie Howard. Narrated by Annie, better known as Cleves, the reader falls for Henry's charm but also sees the cracks growing in his perfect facade. Overall: 4

Characters: 4 Cleves has a authoritative voice that I very much enjoyed. She's outspoken and uncompromising as she makes a place for herself in her new school senior year. Even though she marches to the beat of her own drum, she's found a place for herself among the cheerleaders who genuinely love how unique she is; but it helps that she's already friends with Henry, football star who practically owns the school.
The other characters have their places among the high school stereotypes, but they each have a personal touch. Henry especially is an interesting character examination especially through Cleves's extremely biased point of view. This gives the book an interesting appeal to those who like thriller/ true crime based things.

Plot: 4 The pacing could have been improved by cutting quite a few scenes. The majority of the book was cute snippets that didn't build heavily on each other or advance the plot. It wasn't till 60% of the way through that the actual plot even jumpstarted. Somehow, though, even with all of those pages, there were moments that were skipped over that could have been either really powerful or given the reader a better sense of what was going on instead of being summarized as an afterthought.

Writing: 4 I loved the voice overall. I also think it's a super cool concept to mix history/kind-of-historical fiction with contemporary. It creates an interesting crossover dynamic that will probably expose readers to either more contemporary or historical books depending on which side they favor. Having read a lot about this monarch, it was interesting to see how she translated her research on each of the women, and Henry, into their 2019 high school selves. She did an excellent job with that aspect. The book is interesting by itself, but it's even better as an introduction to a fascinating point in history.


If You Like This Book...
The Cheerleaders: Review Here