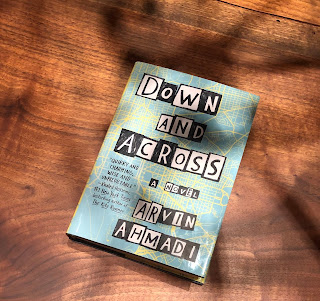 Down and Across by Arvin Ahmadi (320 pages)
Overview: Scott, or, technically Saaket, is sick of studying rat poop. And the job has barely started. His Iranian parents are thrilled, though, because the internship will look great on his resume as he works to become a doctor, or some other respectable thing. Instead, when his parents leave for a month to care for his grandfather who lives in Iran, Scott jumps a Greyhound bus to DC in search of one thing- Grit. To find it, though, he'll have to track down the Georgetown professor that made him want the character trait and whose quiz proved he doesn't have it. What he doesn't realize, though, is the girl sitting next to him while he irons out his scheme is a bigger ticket to the summer he is looking for. Overall: 5+++++

Characters: 5 I'm so in love with all of them because they all felt so REAL. Even impulsive, whimsical, borderline manic pixie dream girl Fiora is grounded in the same place we all are. Ahmadi makes us understand why she acts the way she does, and it's extremely clear that she's far from a vehicle to improve Scott's time in DC.
Scott himself is very relatable. Even for people who don't have immigrant parents, high expectations abound in today's world, and, feeling stuck, whether you know where you're going or not, is a common experience. Scott decidedly gets himself unstuck though and is hilarious and endearing while doing so.
Scott also meets many characters on his journey that are accurate reflections of the world today. He meets a girl at the zoo who winds up being an devoted follower of the "Make America Great Again" movement as well as Trent who is from the Deep South and as Southern gentleman as it gets. Trent would be his parent's dream son if he wasn't gay. Then there's Professor Mallard who makes Scott prove his grit before becoming a cool mentor who lets Scott come to his own conclusions about how to get gritty. All of these people help Scott learn to find a new prospective on his life.

Plot: 5 Ahmadi did my favorite thing ever. He had a plot but it didn't take over. The characters mimic life. They do a lot of the same things as they chase their goals. They go to work and do research and retrace their steps. He gives the characters breathing room to express themselves. Don't get me wrong, things are constantly happening, but it's the people they're happening to, not the things that happen, that are the star of the show.

Writing: 5 Normally there's something I don't like about a book. Something that makes me scratch my head and wonder why the author chanced that rabbit, whether I end up mentioning it in my review or not. I found Ahmadi's book flawless. It's witty and heartfelt and so relatable. And he did my favorite thing ever. He didn't make his ending perfect. Scott didn't get everything the reader would expect. He didn't even get part of it, but he walks away with something different.
I also love that even though Scott is still in high school, the book is a more mature, older YA as he spends his time mainly around adults and college students, so, even though it isn't college YA, it's pretty darn close.