When The Truth Unravels 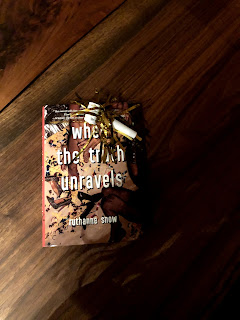 When The Truth Unravels by Ruthanne Snow (297 pages)
Overview: Elin missed two weeks mid semester, not because she had Mono. She was in the hospital, then at home, recovering from her suicide attempt. But no one knows, besides her best friends. Now that it's prom times, her friends want to give her the most perfect night to share a happy memory for senior year. The lengths her friends will go to is extreme, and perfection might not be attainable. Overall: 3.5

Characters: 3 I really wanted to like these girls... Rosie was probably my favorite. She's introverted, which often comes off as cold or mean, but she'll do anything for her friends. Her parents use her as a pawn in the divorce, but her step-dad, Will, would move the world for her. He's a great character as well. Fischer, the supposed "Ice Princess" also turns out to be a good addition as well.
The other girls, though, had some missteps. Jenna was too stereotypically the "perfect girl." It made her lack dimension. Then there's Ket who had tons of potential, but ultimately didn't live up to it. Elin is only ever treated with kid gloves, and she's more of a "thing" in a way, a problem, a plot devices, than a real, fleshed out person. Finally, Teddy is the only guy in the group, and, even though he turns out to not be gay , the girls stating their assumptions as fact at the very beginning leads to a very confusing introduction as his major drama is Rosie rejecting his declaration of love.

Plot: 4 I love the idea of a single night of events with a few flashback scenes. Having loved it in Nothing Left to Burn, I was excited to see another single timeline book. I still really like the concept; I wish the whole story wasn't centered around babying Elin and dancing around elephants in the room. I wish Snow had taken the chance to deep dive into their relationships with each other and as a group as well as bonding and understanding each other better. Taking some of the confrontation head on would have sped up the story and built adrenaline in the reader.

Writing: 3 Before I get into the real writing part, I do have to say that I found a few phrases problematic. For being a book about understanding depression and mental illness, other MI's are not handled with sensitivity. At the start of the book, there's a comment that Jenna's "special brand of OCD" made her excel at doing eyeliner. Later, she's referred to as "Little Miss PTSD". Trivializing these things for a joke isn't funny, and I would have thought that increased conversations around talking about mental health with empathy and understanding would have made someone in the production of this book question these easily altered phrases.
Aside from that, I just couldn't get into he story. The chapters with different narrators were given differentiation by crutches that happen to be major pet peeves of mine- tons of parenthetical sides in Rosie's chapters and constantly defining SAT words at the end of every paragraph in Jenna's. Real people don't do that, even "brainy" teens.


Links of Interest:
Into YA With Lianne Oelke: Here
Down and Across: Review Here
Two Can Keep A Secret: Review Here
Our Year of Maybe: Review Here
New Release Wednesday Reading