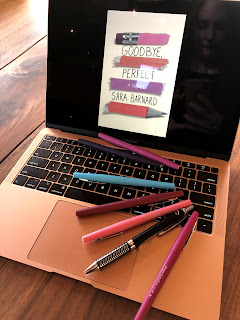 Goodbye, Perfect by Sara Barnard (January 29)
Overview: Eden has always been the irresponsible one with poor grades, a loud mouth, and a general air of irresponsibility, but it's her friend Bonnie that takes over the headlines of every major news station in the UK. Bonnie disappears with her ,music teacher and parent boyfriend, Jack Cohen, better known to everyone at Kett as Mr. Cohen. Eden can't believe that a friend would do this, but, suddenly, when she gets a WhatsApp message from Bonnie, she's clued in to their runaway mission. Pressured by her family, Bonnie's, and the cops, Eden refuses to tell them what they know because she made a promise to her best friend. Overall: 3.5

Characters: 3 Okay, I guess I can see some of the thinking behind these characters, but it wasn't articulated very well. Eden refuses to tell on her friend even though she knows how wrong and serious the situation is. I can see making a promise and being hesitant, but I can't see a sixteen year old not coming around to giving over the information at at least the second questioning by the police. For  as badly as Eden wanted Bonnie back, she sure didn't do anything about it. I don't think that Barnard worked hard enough to prove Eden's logic to the reader especially when Conner, Eden's boyfriend, can see things so clearly.
Also, the author seems very confused about how she feels about Bonnie. While all the adults constantly say that she is a victim, which she is, there's also a fair bit of blaming and negativity toward Bonnie without digging into what was going on in her head to lead her her being susceptible to and running away with her teacher. Also, there's very little about how wrong the dynamics of that relationship is beyond the adults saying that it's a "power play." Honestly, most of the rationalization in the book is about why Bonnie thinks it's okay and why Eden might be able to believe that.
I just felt like these characters really needed to be explored more, especially given the contents of the story that were covered. Also, even though there were parts where the author seemed to be trying to scream that she understands and can connect with teens, I found the whole book sort of looked down on all the teens involved as incapable or stupid because they're young.

Plot: 3 While I thought that the main story line about Bonnie running away and finally being gone after by Eden was poorly executed, I did love the storyline about Eden and her sister Daisy's adoption. I. thought it was beautiful how her adoptive parents always make sure that they know they're loved just as much as their biological daughter, Valerie. I also loved how Valerie and Eden were able to find a better understanding of each other.

Writing: 3 While there were moments where I got into the story, I was just left with a bad vibe at the end of it. Beyond my, I guess, ethical issues with the story, the main plot happens to a minor character. Bonnie's story os the main event, but the reader barely knows her. Eden's real story is that she has to take her exams. If the story had been written from Bonnie's point of view and delved into the psychology of how someone could fall into an abusive place like that, the story could have worked, had it been done seriously and sensitively, but there's really no story at this time in Eden's life.
Also, I think that if you take on a subject this serious, you should include an author's note explaining facts about the actual topic you discuss instead of leaving the reader in a strange, convoluted spot of confusion.


Other Books By This Author...
A Quiet Kind of Thunder: Review Here