Girl Made of Stars 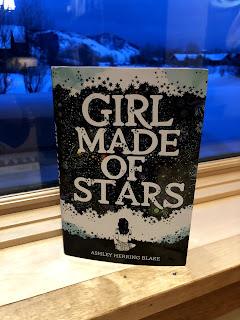 Girl Made of Stars by Ashley Herring Blake (295 pages)
Overview: Mara's twin brother is accused of rape by her friend. Mara's attempt to go back to being best friends with her ex-girlfriend isn't working. Mara is so lost. Sisters, best friends, parents, and everyone at school have an opinion about what happened between Owen and Hannah in the woods. Mara's mom, who's always been a devout feminist, is suddenly vehemently denying that Owen is at fault. Mara isn't so sure. Even though she loves her twin and can't imagine him as a rapist, she knows her best friend would never lie. Overall: 5+++++

Characters: 5 Mara is a wonderful character. She's so honestly confused and torn up about what happened, but she quickly aligns with Hannah. Supporting her best friend becomes something for herself, as well, though, because Mara is a survivor too. She takes Hannah's pain like her own as everyone at school and home takes Owen's side. Mara has to come to terms with her reality. She finally opens up to those closest to her, and they come to understand the minuscule manifestations of her panic that bubbled to the surface from time to time. She has to learn that different doesn't always mean broken.
Hannah and Charlie form the trifecta of support with Mara. They stand up for each other fiercely and bond together even when it looks like they're going to break apart. Hannah is honest in her fragility and her confusion about how the rape even happened. Charlie is grappling with her own realization that she's nonbinary and whether she wants to tell anyone. But the girl's clash too, and their different levels of understanding about each other's situations lead them to have strong, learning conversations where they come to realize more about each other's experiences.
Finally, there's Owen who's always been a jokester- charming despite his flaws. He's also been inseparable from his sisters. His character is an interesting look into the parts of a person you can miss, as Mara's eyes are opened to the toxic side of his nature as the pressure and stress of possible charges loom over him. Both Hannah and Mara have to reconcile realizing the person they love isn't the person they thought they knew.

Plot: 5 Wow. The story is so layered it's hard to explain how rich and varied and just... wow this story is. What starts as a plot about a sister realizing her brother isn't who she thought he was and reconciling whether she has to stand with family or what is right, turns into a story of healing with yourself and healing with others who understand. There's pain, but there's also plenty of healing, which is also painful, but it's so powerful and empowering. I could not put this book down.

Writing: 5 Blake cuts to the truth. She doesn't hold back, but she's delicate and honest in her portrayal of Mara and Hannah. She makes it plain and simple. Rape is about two things: control and trust. The way that she shows both girls grappling to gain these two things back for themselves, succeeding at time and failing at others, is so real. She addresses clothing and it's strange spot in society as Mara tries to use her rule breakingly short skirt as a sense of saying she has control over her body and what she puts on it. And it makes her feel sexy and awesome. She's wearing the skirt for herself and no one else, even if the world wants to spin the action into something vulgar. Like with the outfits, Blake doesn't shy away from confronting how society has an embedded nature to spin attempts to gain control or the comfort of justice as something negative if a girl does it, and the pain and frustration it brings Mara and the other girls is perfect portrayed.
This is the book for those who want to be seen and for those who need to understand.


Books Like This...
The Way I Used To Be: Review Here

Other Books By This Author...
Suffer Love: Review Here

Links of Interest:
When The Truth Unravels: Review Here
Into YA with Lianne Oelke: Here
Down and Across: Review Here
Two Can Keep A Secret: Review Here
New Release Wednesday Reading Standout Book Weekly Reviews and Recommendations