This Is Not a Test 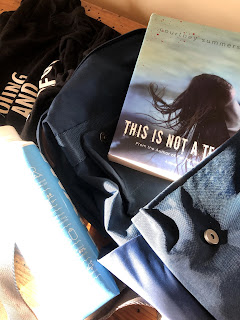 This Is Not a Test by Courtney Summers (326 pages)
Overview: Sloane wanted to end her life. And then the apocalypse came. Her focus suddenly turns to survival because that's what she's supposed to do. She finds a group of other teens from her school, and they survive in the infected city for seven days before finding shelter in the high school. With all the doors barricaded and the necessities provided, suddenly, there's room to think, reflect, and feel again, and their safe haven quickly turns into a cage. Overall: 5

Characters: 5 This cast has blown me away. Courtney Summers in general has done that with every aspect of the novel, but the characters are all so detailed and unique and flawed and emotional and broken. It makes for the perfect novel.
Sloane has recently had her sister leave without her, even though the plan was for them to escape their abusive father together. Without Lily, she feels her life has no point, but when it's seriously threatened, something compels her to run. Being around the group and their intense will to survive awakens new things in Sloane, and, even if they're not all positive, they alter her definition of what it is to live and to survive.
Cary, who's never been more than a slacker/stoner at school, steps up the lead the group and is very much responsible for everyone's survival. He struggles with getting the others to understand and respect him like a leader, and the other bold personalities often cause his anger and aggression to flair. He maintains a tough exterior, and the tiny cracks Summers draws into him makes reading his narrative intoxicating.
Then there's Rhys who tries to be loyal and agreeable. He wants to survive and he wants what's best for the group. He's soft and easy going, but what he experienced before he got to the school has shaken him and his understanding of himself.
Trace and Grace are twins from what Sloane sees as the "perfect family." Grace tries to be a mediating force and a source of steadying for the group to counterbalance her brother. Trace is fuming with pent up rage that only builds the longer the group is together. He's a destructive force, and everyone knows that his tendencies will be a fatal flaw.
Harrison is barely notable. He's the youngest of the group, and he's falling apart the whole time. Summers places him as an interesting reminder of innocence and emotion. As everyone around him hardens, Harrison only gets softer.

Plot: 5 I don't read sci-fi, paranormal, or post-apocalyptic books almost ever, and, for readers like me, I would say that this book really isn't any of those. It's a contemporary novel in a hyper intense environment. There isn't much survivalist activity as most of the book is spent in the school where they have the necessities. The infected have their traits that are very zombie-like, and getting bitten will cause infection, but there isn't any time devoted to how or why the events are happening.
The apocalypse provides plenty of plot for those who like action, but, at its root, Summers is telling a contemporary story. It's one about Sloane confronting her life, how it has impacted her mental health, and deciding whether she wants to keep living it. It's also about how the group works together: friendships, romance, enemies. It's one of the most unique novels I've ever read.

Writing: 5 This is my third Summers novel that I've read, and it is my favorite. It is the strongest I've experienced her voice. She sucks you right into Sloane's head and her world to the point where Sloane's emotions are yours and your heart races along with hers. She's perfected the perfect balance of emotion, character development, plot, and setting; somehow, she makes it feel effortless.
Another remarkable thing that I noticed was that she harnessed the use of "tell" perfectly. I know that "show not tell" is a major mantra in the writing world, but, in some moments, relaying back words said in the thick of thee actions that are happening and the emotions that are coming creates a much more atmospheric effect. Not everything has to be shared through dialogue, and I'm glad that she wrote it with such a healthy mix of techniques.